After yesterday's post and the comments about incorporating black and white photographs into a drawing I suddenly remembered a similar exercise we had to do at school. Our art teacher had cut small pieces from black and white photographs in magazines and we had to select one, glue it down on the page and work it into a finished drawing, without seeing the original source. After a quick rummage under my bed I found a folder of old drawings and unearthed this. 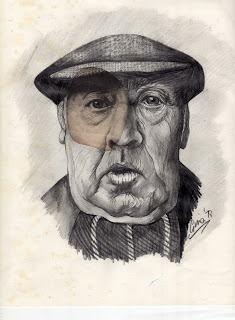 I was pretty certain this was the example I drew at school but I can see that I've dated it and by 1978 I had left sixth form so it must have been something I did at home a couple of years later... but still using the same technique. 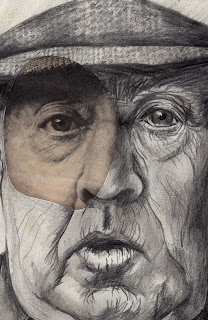 When I was in sixth form it was my dream to go to art college and get a job either as an illustrator or working in fashion. I don't think my parents were that keen and my school definitely weren't. I think they just saw it as a pathway to degeneration and unemployment. I didn't have the courage to persue that dream and mostly I remember it was because I never believed I was talented enough. I don't recall ever being encouraged and told I was good at art at school (they tried to convince me not to take art A level) and so I never had the confidence to believe I could succeed.

Which is somewhat ironic really... because now I can see anything is possible if you believe in yourself.
This is a message to all four of my sons and to my two step children but in particular to Sam who is a very talented writer and Jacob who is a very talented musician and both who dream of working with their particular artistic talents... follow those dreams guys!
Posted by Gina at 09:53