Just when you least expect it

You guessed I would be back didn’t you, although I’m here for reasons I would never have guessed! Since I was last here it has been quite a month one way or another.

It all began with my daughter in law being taken into hospital in labour three weeks early. After four very stressful days for them (and considerable worry for us), the labour wasn’t progressing and so Rosie was delivered by emergency caesarean. Fortunately, all was well eventually and we have another beautiful and very tiny granddaughter 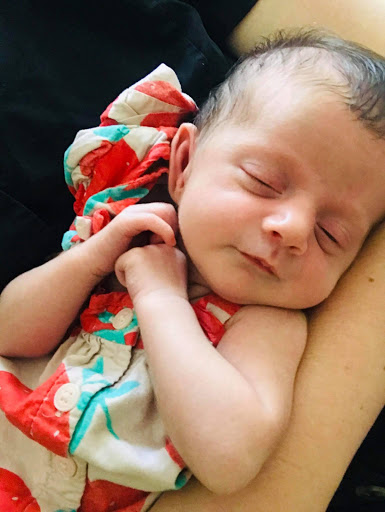 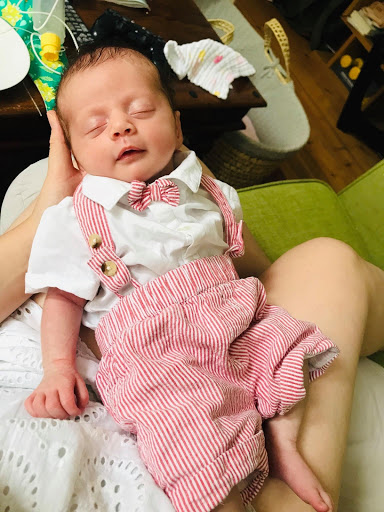 Meanwhile, Stewart had received a call that his father was very poorly. He drove straight up to Scotland not knowing if he would get to see him. As it happens his lovely Dad hung for another week before passing away peacefully, so Stewart, his Mum and sister were all able to be with him. Not entirely unexpected but sad, nevertheless. Meanwhile the dog and I carried on at home, with one more weekend of Open Windows and then the launch of my online course. Amid all the stress and sadness, it was an incredibly successful launch and the class was full within a week. So far so good and there have already been some beautiful results, so I have started to plan and film for some more shorter classes to be launched in the autumn, although I’ve had to put a temporary stop to that for now. Read on and you’ll understand why. 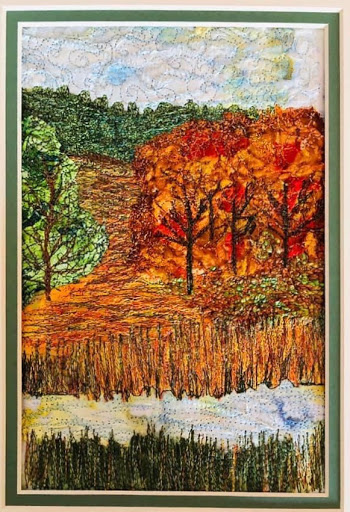 Couple of the finished landscapes from my course. 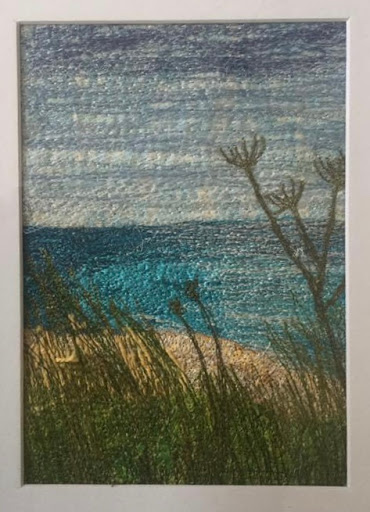 Of course, we have since both returned to Scotland for the funeral, which was a beautiful send off for a much loved man, despite only being allowed twenty people, all masked. Given what a tough few weeks we’d had, I suggested we stop off for a couple of days break on our journey home. Despite what seemed like the entire country choosing to vacation in the UK we eventually found a fabulous B & B in Ambleside in the Lake District.

The town was too crowded for my liking and there was an awful amount of litter everywhere, but it was still beautiful and the weather was kind to us.  There was a lot of rain overnight, however it was dry during the day and we managed two wonderful days of walking. Until… 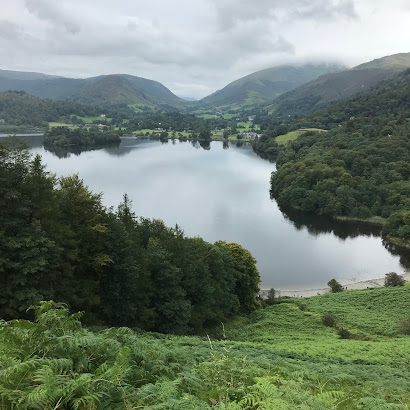 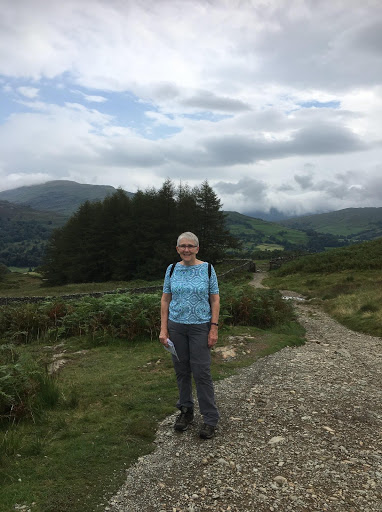 I slipped on some wet mossy rocks on a steep descent falling heavily on my lower back, putting my right hand out to stop my fall. After lying in the wet for what seemed like an age, I got up, brushed myself off and walked gingerly back to our B & B. After a hot shower I decided I was a bit shaken up and bruised but okay and we even managed to go out for pizza. Fortunately, I can still hold a wine glass in my left hand. 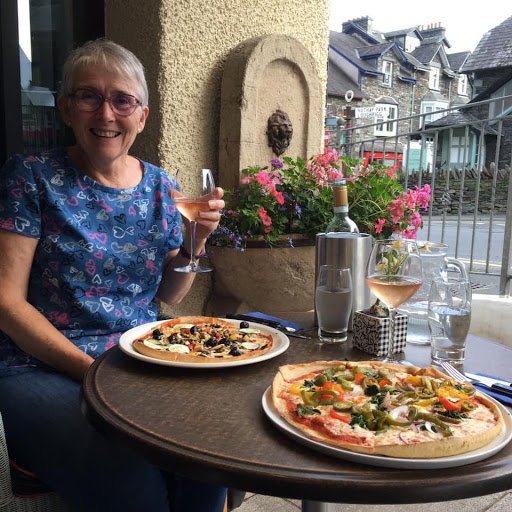 We drove home the following day and despite not having much pain in my hand it was very bruised and swollen and I couldn’t grip anything or apply any pressure so called 111 for advice. After endless questions and answers, which I then had to repeat an hour later to the clinical practitioner who called back, I was told I should not go to A & E but rest, ice, compress and elevate my hand for 72 hours. 72 hours later, with virtually no improvement, I called 111 again as advised. Despite them having all my notes cue all the same questions all over again… four hours later when I got the call back I went through them yet again for a fourth time… questions designed to ascertain if I had internal bleeding, was about to have a heart attack or had contracted an infection. All I needed to know was could I get myself an x ray! And the diagnosis… ‘I can’t tell from your answers whether it is bone or soft tissue damage’ No shit Sherlock! As a result, I was advised to call my GP who could book me in for an x ray… hooray! Except after going through it all again, I discovered he could indeed book me in for an x ray (although he was reluctant as he didn’t think my hand looked swollen enough from the photo) but because of Covid there would be a six week wait. So finally, the next morning we drove 25 miles to a walk in critical care centre, where the staff were wonderful.  I was seen within an hour, received x rays of my hand… and received the diagnosis. A spiral fracture of my fourth metacarpal on my right hand, plastered to my fingertips there and then and referred to plastic surgery to have a pin inserted, which will happen tomorrow! 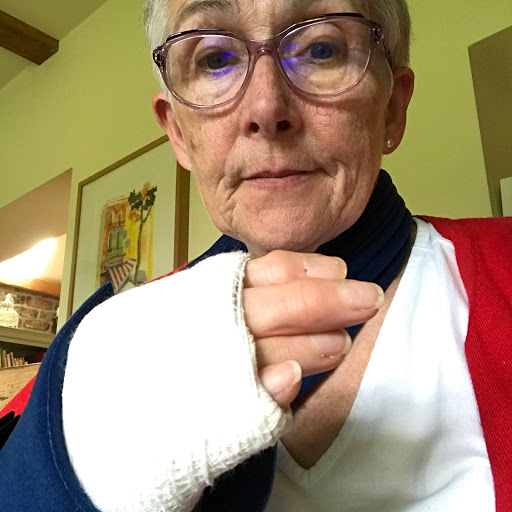 I’m not complaining… when it works our NHS is wonderful and when I finally received it, my care was excellent but it does feel like the right hand hasn’t a clue what the left is doing… bit like me at the moment really. The nurse who did my plaster agreed 111 needs to get its act together!

So here  I am trying hard not to focus on all the things  I can’t do which are many, like write, draw, paint, knit, crochet, sew, tie my shoelaces, cut up my own food etc and instead think of all the things I can do, which are few!

I can type very slowly with one finger of my left hand, which is why I’ve written a blog post, although it has taken all morning so I can’t really see it becoming a regular activity. 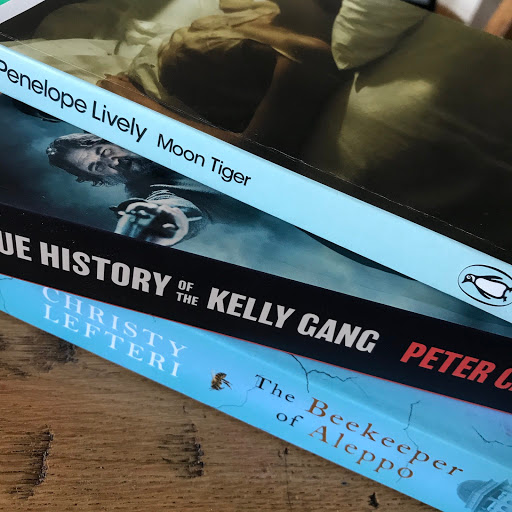 I can read and fortunately have a pile of books to get through. I have just finished ‘Where the Crawdads Sing’ which I really enjoyed despite finding bits of it hard to believe. I also felt the last couple of chapters were superfluous and it could have done without all the explaining… hard to say much without giving away spoilers but I prefer an author who leaves something to the imagination. I have also read ‘The Distance Between Us’ by Maggie O’Farrell who always writes a good story and I’m currently loving ‘Moon Tiger’ by Penelope Lively.

Of course, I can watch TV and we’re working through the entire ‘Line of Duty’ boxset.  I’m not sure how we missed this up until now but it is edge of your seat amazing. So cleverly scripted and well-acted, I love it.

Well meaning friends in the art community have suggested it is an opportunity for exploring work with my non dominant hand but I’m not really feeling the urge for that right now. Maybe in a week or so when I’m really bored.

So that’s my news. I’m now going to stop as I have cramp in my left hand from all this unexpected activity. I’m going to see what I can rustle up for lunch as Stewart is at work and I’m on my own today… could be interesting. And then I’m going for a walk (without the dog, who I can’t manage on my own) to borrow a jigsaw from a friend, although it now looks like it's going to rain and I'm not sure I can get my coat on. Can’t remember when I last did a jigsaw!