And some good news!
Shall we get the news out of the way first?
We have finally exchanged contracts and in a little over weeks time we will be in our new home. I had got to a stage where I never believed it was going to happen so I’m definitely wearing my happy pants this week. Smiles all round are the order of the day! And maybe even a cake to celebrate. 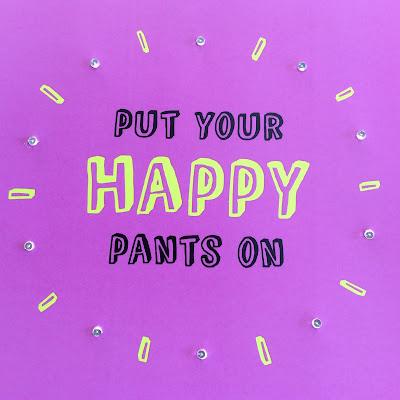 So now for that cake.
It's time again to join in with the Cake Slice Bakers (all the details are below). With the house taking up so much time I didn't manage to join in last month and almost didn't this month - this post is already three days late. I remember why I took a break from joining in with the Cake Slice Bakers last year... much as I love baking I often find the choices too complicated for my busy life, with too much frosting and frequently too sweet. And then I'm never that good at writing a post in time and doing all the links etc. But there was one cake this month that sounded too good to miss. Simple to put together, no fancy assembly required, no elaborate decorating. It's an everyday cake, good to eat at anytime of day and far too good not to share the recipe. The only downside is you are likely to eat too much of it in one sitting... a second slice is so tempting!  It is packed full of luscious jammy blueberries, flavoured with a subtle hint of lemon and the ricotta makes it unbelievably light. I don't think I have ever used ricotta in a cake before... who knew! 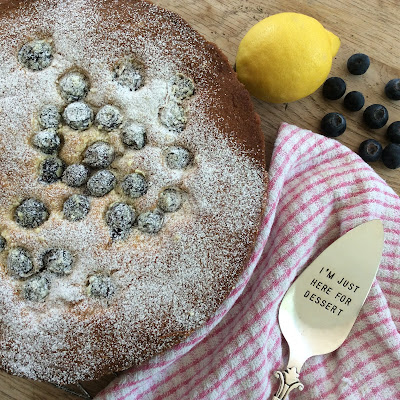 This is best eaten warm, although still very good cold the following day (ask me how I know) and a dollop of creme fraiche on the side doesn't go amiss either! It is definitely one I will bake again. 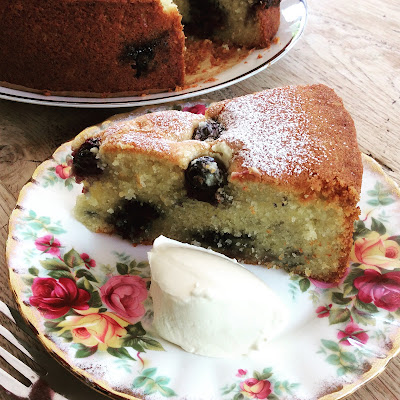 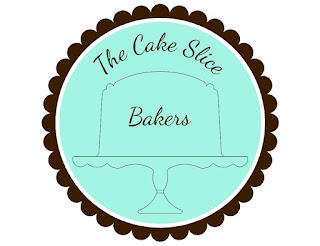 Each month The Cake Slice Bakers are offered a selection of cakes from the current book we are baking through.  This year it is The European Cake Cookbook by Tatyana Nesteruk.  We each choose one cake to bake, and then on the 20th - never before - we all post about our cake on our blogs. There are a few rules that we follow, but the most important ones are to have fun and enjoy baking & eating cakes!
Follow our Facebook, Instagram, and Pinterest pages where you can find all of our cakes, as well as inspiration for many other cakes. You can also click on the thumbnail pictures below to take you to each of our cakes. If you have a blog and are interested in joining The Cake Slice Bakers and baking along with us, please send an email to thecakeslicebakers at gmail dot com for more details.
The Cake Slice Bakers also have a new Facebook group called The Cake Slice Bakers and Friends. This group is perfect for those who do not have a blog but want to join in the fun and bake through this book. 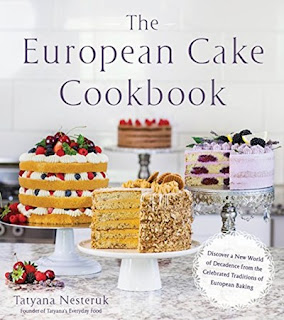 The Elephant in the Room

Crochet
I finished another blanket.
I know... I finished a blanket just a week or so ago but this one has been on the go for many years. At least six years as I first mentioned it here. I would go through phases of  making squares and then leave it for months before picking it up again to add a few more. Even when I had finished the 168 squares, each one subtly different from the last, it took me almost as long to sew it all up... all those loose ends! Was it worth it? Yes I think so, although what I will do with it now I don't know. I do know I might take a break from blanket making! 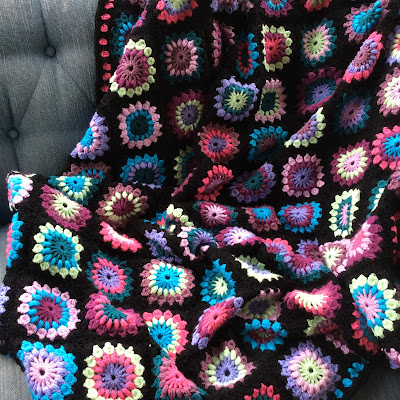 Reading
This is going to be in the order that the photos have loaded rather than the order that I have been reading, although to be fair I seem to have read a lot in the past month  and I can't really remember the order in which these book were read! 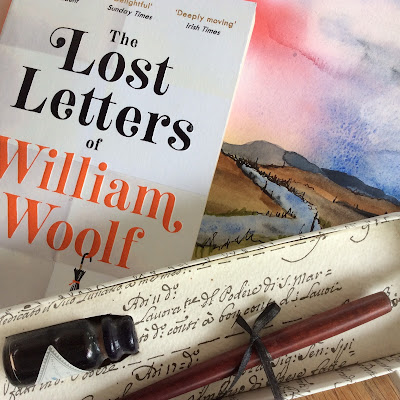 I had high expectations for The Lost Letters of William Woolf. It seemed such a great idea, such a wonderful premise... a lost letter department of the Royal Mail where letters were reunited with their recipients. The romance of hand written letters gone astray, finally arriving at their destination seemed to offer such great potential for a story. But I was disappointed, finding it far fetched and over romanticised and mostly about the failing marriage of William Woolf. 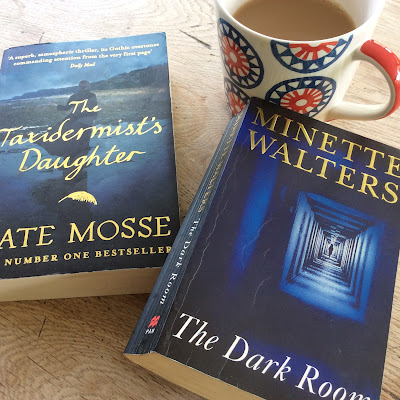 In the need for a quick satisfying read I have turned to thrillers. The Dark Room was okay but felt very dated, and The Taxidermist's Daughter was okay but wasn't really engaging me... probably more to do with that elephant in the room effecting my concentration rather than the quality of the writing. However I did read The Killing Habit by Mark Billingham in just two days... I do rather like DI Tom Thorne! 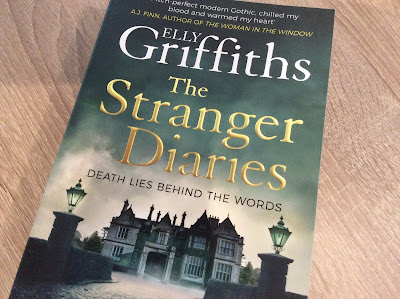 I also enjoyed The Stranger Diaries by Elly Griffiths, Normal People by Sally Rooney and I am now part way through An American Marriage which I am thoroughly enjoying. Maybe my powers of concentration are returning!

Knitting
I have been picking up my knitting on and off since the start of the year and it has taken me this long to finish this Hitchhiker scarf. At the beginning of the year I made a pledge to finish nine projects in 2019. This is the third project that I have finished which  doesn't bode well for getting them all done by the end of the year does it. 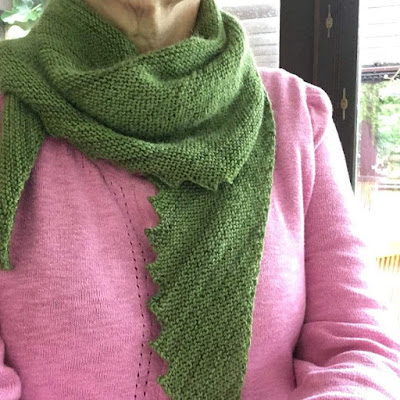 Looking at that photo I am slightly alarmed that my neck looks like a turkey's... oh dear one day you look in the mirror and all is well with the world then suddenly before you notice you have turned into your grandmother. Not that I have a problem turning into my grandmother as she was a wonderful woman... but you know what I mean! At least the scarf looks good! 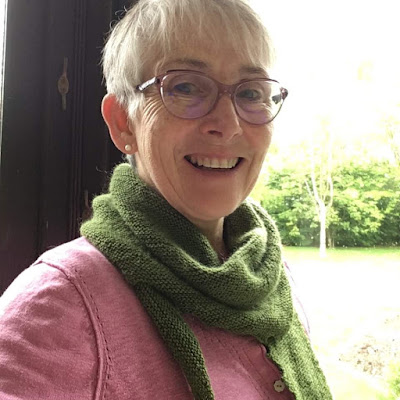 Shopping
I bought the dog a new bed because I felt sorry for him.He chooses to sleep on the floor as he only has a hard plastic bed... his own fault as he eats his beds. But do not be fooled by him curled up looking cosy... he loved it for one night before he dragged it out and chewed it, pulling out half the stuffing. Which of course is why he didn't have a comfy bed to begin with. You think I would learn wouldn't you. 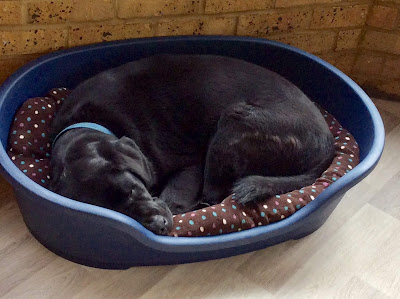 Baking
I have made two chocolate cakes this week. The first was for Free Cakes for Kids, although this time it was not for a child's birthday. The Cambridge branch of the charity also supports a couple of homeless charities and so this chocolate cake was delivered to Wintercomfort. Everyone with a June birthday was entered into a draw to win the cake. 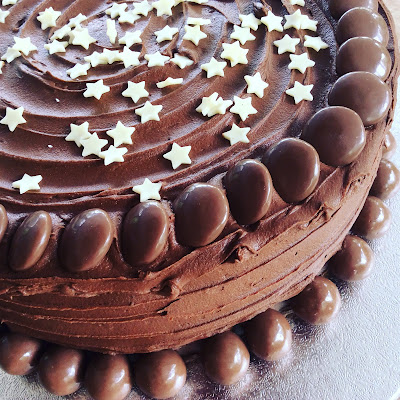 Donna won the cake and then shared it with all the clients using the services that day. I was privileged to be asked to stay for a cuppa and a chat. It always leaves me humbled that just a cake can mean so much. 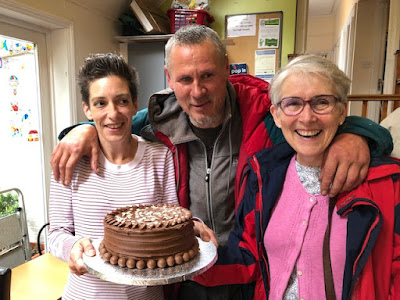 The second chocolate cake was for this gorgeous baby... except he's not a baby anymore (although still pretty gorgeous but I am biased). Son no. 3 Joe celebrated his 30th birthday this weekend! Where did those years go? 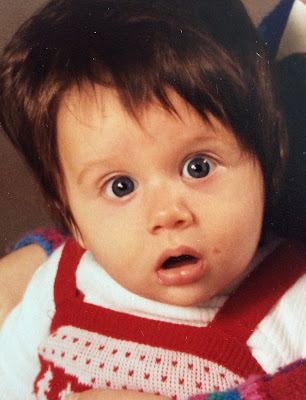 We had a family barbecue to celebrate. At Easter we thought it would be the the last family gathering in this house. Little did we know... 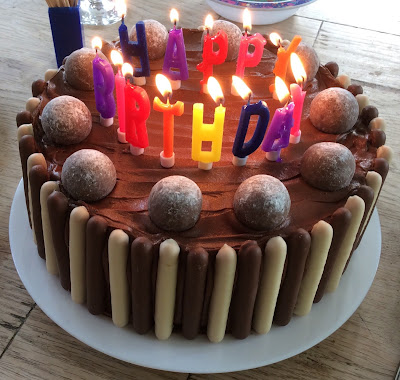 Painting
Each week I take my Mum to her painting class. Mostly I just sit and draw in my  sketchbook  but the for the past couple of weeks I have been joining in with the class. Last week I painted that proverbial elephant! 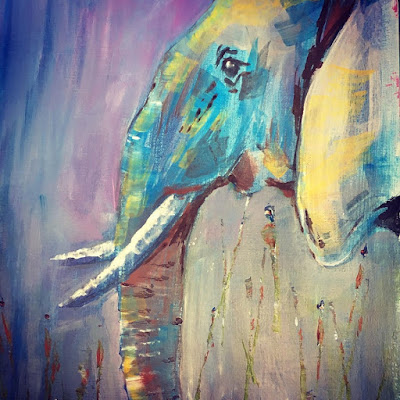 Talking of which... today we had a bit of a break through. I don't want to tempt fate by saying too much but I might actually be shooing that elephant out of the room by the end of this week!

Everywhere I go the first question on everyone's lips is "Have you moved yet... any news... have you got a date?" I see my Mum twice a week and she asks me every time I see her. It's natural that people are curious and they care but it is driving me crazy. And believe me when it happens I will shout it from the rooftops I will be so relieved. Everyone will know! 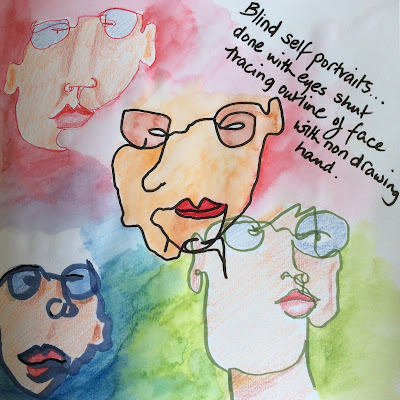 We have packed all unnecessary items, got rid of unwanted or excess furniture, I have sorted and emptied virtually every cupboard, cleaned every nook and cranny (so long ago it will all need doing again). The loft is empty, the shed and garage are tidy... and so we wait surrounded by empty rooms and boxes. We wait for solicitors and the local council to resolve an issue over a small piece of land. So your guess is as good as mine! The upshot of all this is that it has left me with a lot of extra time on my hands... it's a bit like being in a waiting room for weeks on end!

And so I have been filling my time with making art amongst other things. I mentioned several weeks ago that I was following along with a free online sketchbook class. It was two weeks of intense classes covering a wide range of techniques. All the images here are pages from my sketchbook as a result of just a handful of these classes. The one above involved tracing around the face with the non dominant index finger whilst simultaneously making an outline drawing of the face in pen... with your eyes shut! Yes... those four faces are me! Told you I was going crazy... that's what I look like! 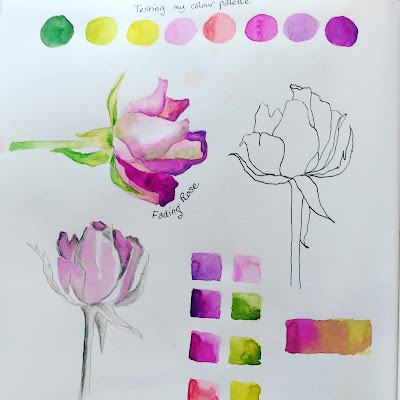 I did some colour mixing and observational drawing with water colours and invented whimsical towns in pen and ink. 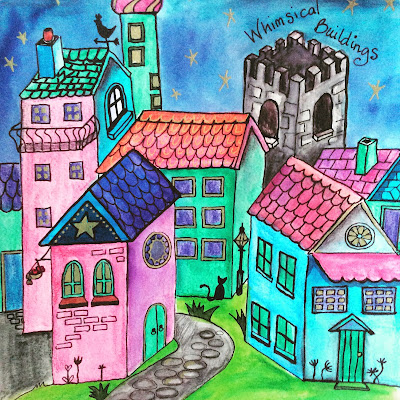 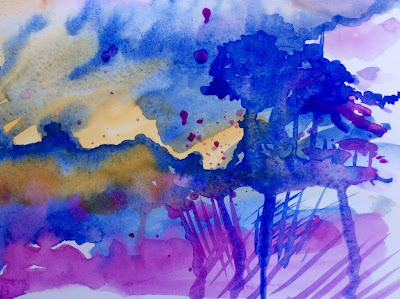 Experimenting with different media, sometimes drawing the same thing over and over. 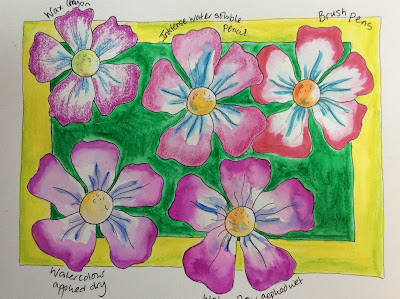 Some of the techniques and ideas I will never try again but I learned so much and worked in so many different styles. Best of all it has got me back into the habit of working in my sketchbook regularly. I have also been taking my Mum to her art class once a week as she isn't really driving at the moment so that gives me another chance to draw uninterrupted. 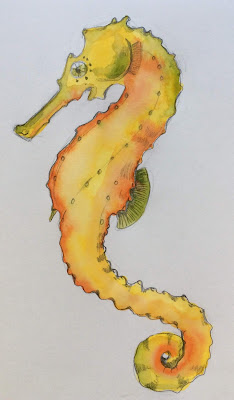 I think one of my favourite exercises was taking a photograph of cracks in the pavement and finding creatures hidden in the cracks, which is an actual thing... Pareidolia, the tendency to see faces in inanimate objects. 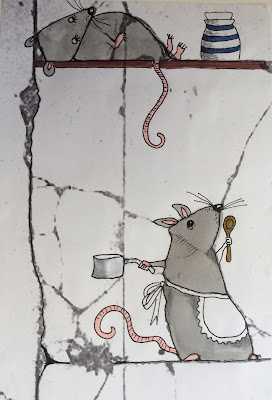 Like these mice or this crazy bird lurking in the sidewalk! 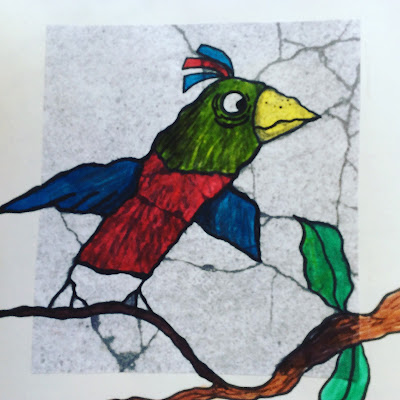 I've also been doing lots of crochet in the evenings and although it is not really the time of year to have blankets draped over your knees I finished this blanket in the sweetpea trellis pattern from Attic24 but in a coastal colourway and I have another blanket just waiting for its border. I'm slowing running out of things to do but I guess I can always start the cleaning again if I get really desperate! 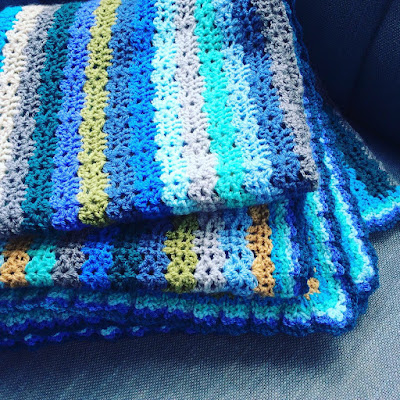 Apologies that I still don't seem able to comment on blogs or reply to your comments here (unless I have your email address)... I cleared my cookies and managed to leave a single comment on Christina's blog and then it stopped working again, but I am reading. I promise!
Posted by Gina at 18:04 11 comments: