Knitting myself in Knots

An update on the hand since I was last here...
I turned up for my scheduled surgery having had nil by mouth for 12 hours to find I wasn't on the list for the day. During the long wait to find out what was happening, a young lad with an identical injury to mine asked me if I had broken my hand fighting. Being rather alarmed that I looked the sort of person who might sustain an injury due to fisticuffs I explained 'my fall' but wish I had told a little white lie. It probably would have made his day to have met a boxing granny! Eventually I got to see the surgeon for him to tell me he didn't think I needed surgery after all, which was actually a relief, although probably quite convenient given I'd been missed off the schedule. I didn't really want anyone cutting my hand open so I didn't mind. Apparently there is a slightly higher risk of me breaking it again without a pin so it means my fighting days are over but I reckon I can live with that. 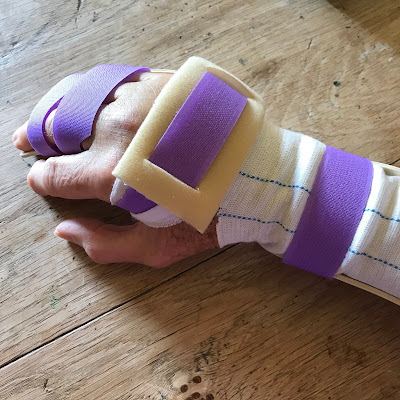 The cumbersome cast was removed and replaced by a splint with some pretty snazzy purple strapping, allowing some freedom of movement in my forefinger and thumb. The world was my oyster with such a nimble pincer movement, although I soon discovered picking up anything heavier than a jigsaw piece was pretty much impossible. 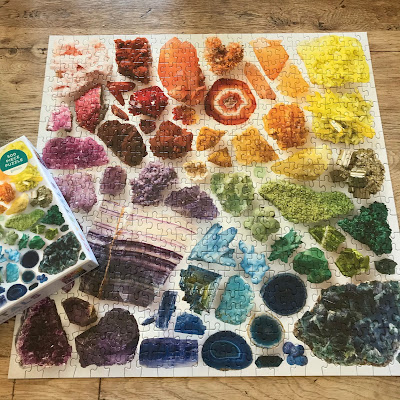 Much as I appreciated being lent the jigsaws, after finishing the second one I really had scaled the heights of boredom. I couldn't cope with this for another four weeks. Spying some knitting that had been languishing on the needles for the past six months I had a mad idea. This was the first of a pair of Latvian mittens that I offered to knit for a friend who didn't understand the pattern. I didn't like to tell her that I didn't understand the pattern either, so this was about the third reincarnation of mitten no. one which was why it had been abandoned. There were just about six rows left on the thumb and it would be finished. What if I could adapt my pincer movement to knitting? I found by supporting the knitting with my left hand I could grab the yarn and wrap it around the needle with my thumb and finger of the broken hand. It was slow, it was cumbersome, but I could do it and after about three nights I finished the first mitt whilst watching endless episodes of the Fruity Knitting podcast.  In fact I have learned so much about knitting during those few rounds of the mitten thumb I think I now sort of understand the pattern and the second mitt will be a doddle. Well it might be once I can use my hand properly again. At least I have cast on and I'm ready to go. 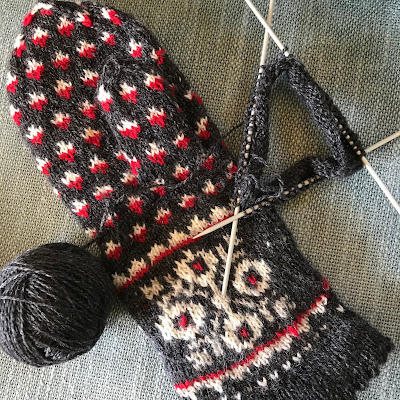 Inspired my my mitten success I thought I would practise on something a little less fiddly and found a kit I bought last year from my lovely friend Lucy Locket for a hot water bottle cover. Except it wasn't less fiddly and in fact was cast on over two circular needles creating a seamless bag, something I had never done before. But my technique has improved and I can now even support the right hand needle in my right hand... and all that thumb twiddling is proving to be excellent physio. 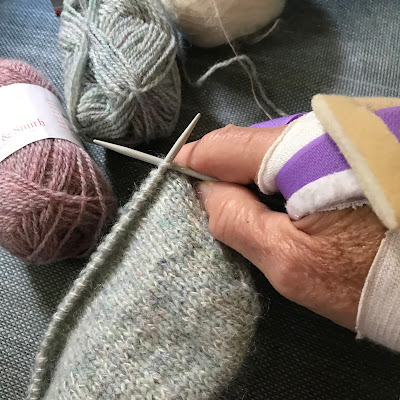 So now I have a lovely new hot water bottle cover which I don't really need but that's beside the point! 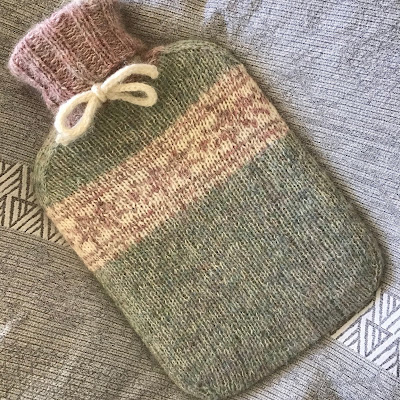 Something else I have discovered I can do with just a finger and thumb is press those buttons that say 'buy now' and I seem to have purchased several more balls of yarn for the literally hundreds more knitting projects that I'm planning. I don't like to do things by half... I'm all or nothing me. 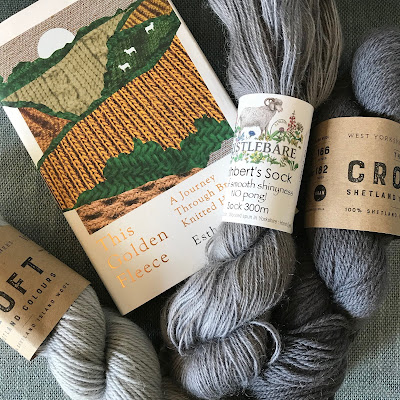 In between all the knitting planning, knitting watching and knitting doing I've also found time to record the final videos for my next online class "Free machine fun - drawing with the needle". Some of my stitching is a bit wonky but I can draw better with the sewing machine than I can with a pencil so it has all worked out quite well and is a lovely introduction to free machine embroidery for the beginner or anyone wanting to brush up their skills. You can find out more about it here if you are interested:
Free Machine Fun 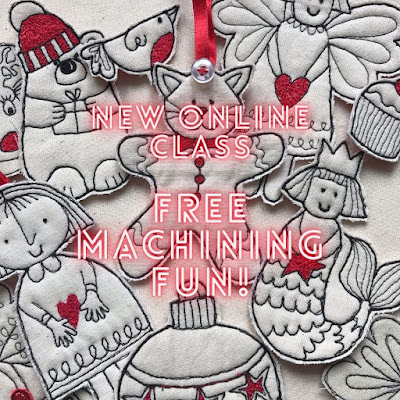 So that's my news for the past couple of weeks. I've still got another week or so of wearing this splint so plenty of time to discover more skills... which funnily enough don't include cooking, washing up, vacuuming, ironing etc. But I think I can cope with that.
Posted by Gina at 15:00 15 comments: