I mislead you... there weren’t any tulips (except for masses of artificial ones in the flower market) but we have been in Amsterdam for the weekend. On Friday morning we were up at 4.30 am to catch a five o’clock train into London. Is it just me or is there something exciting about getting up in the middle of the night to go on holiday. I’m sure it goes back to my childhood when we would be bundled into the back of the car before it was light to make an early start down to the West Country for our annual camping holiday. As children I’m not sure we arrived any earlier but on Friday we were on a direct train from St. Pancras by 7.15 and in Amsterdam by midday. So much easier than flying. 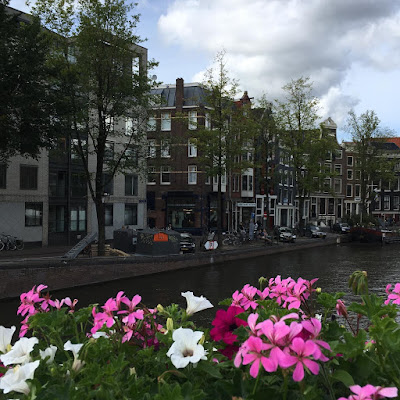 I had pre-booked tickets for the Anne Frank house as we missed visiting on our one and only other trip to Amsterdam. I read her diary when I was at school probably at the same age as Anne when she went into hiding but I'm not sure how much it meant to me at the time. However actually seeing where the family spent two years hidden made it seem so much more real. I am always concerned that visiting somewhere like this might feel a little voyeuristic but it was certainly interesting and worth doing, if only to serve as a reminder of the atrocities of the past and how easily it can be for a society to embrace racist and fascist beliefs. A lesson for today I feel. 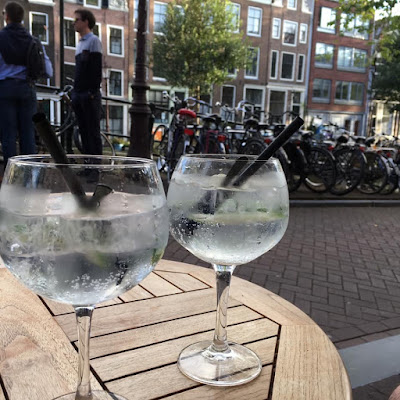 As with any city break there was also much walking, eating and drinking. Amsterdam is such a picturesque city that there are plenty of spots just to sit with a drink in hand to watch the world and boats go by! 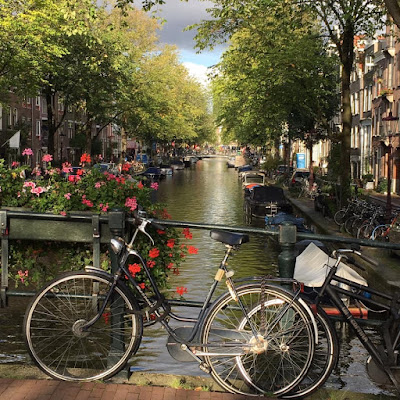 We stayed at an AirBnB, a lovely apartment to the west of the city but withing easy walking distance of the centre. On our first evening we ventured out to a bar for our supper, recommended by our AirBnB hosts. The meal was lovely but we probably raised the average age of the rest of the clientele by about twenty years. We felt particularly old when the waiter asked us if the music was too loud for us! We actually enjoyed the mostly 1960s/70s music and watching the crowds of young people out relaxing and enjoying themselves on a Friday night. When I sent a message to our hosts to tell them we enjoyed their recommendation the response was "Ah yes, Friday night is party night at Cafe Thuys for young people - but typical Dutch experience". Perhaps the fact that our hosts looked no more than early thirties from their photos should have given me a clue, but we enjoyed our evening so much more than if we had gone somewhere touristy. 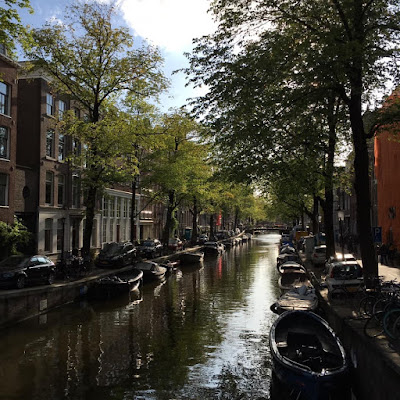 The following morning was a slow start and after brunch and a vist to the Oude Kerk (Old Church), rather ironically situated in the middle of the Red Light District, we met up with our friends Janet and Pete who moved to the Netherlands about a year ago. With them as our guides we spent another delightful afternoon wandering along canals, exploring markets, stopping for the occasional beer and just generally enjoying a sunny afternoon in the city. 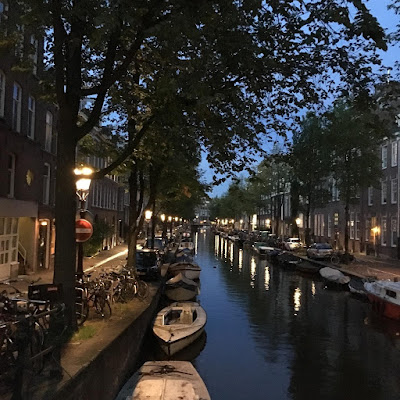 On Sunday morning we caught the bus out to Janet and Pete's home in Edam, a beautiful small city just 20 km north of Amsterdam. 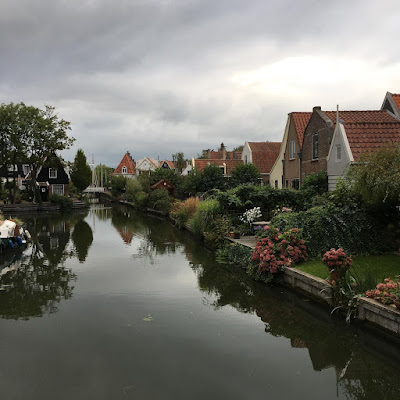 After sampling some rather good Dutch apple cake, we spent another fine day wandering down to the lakeside, via their allotment, past many typical Dutch homes. 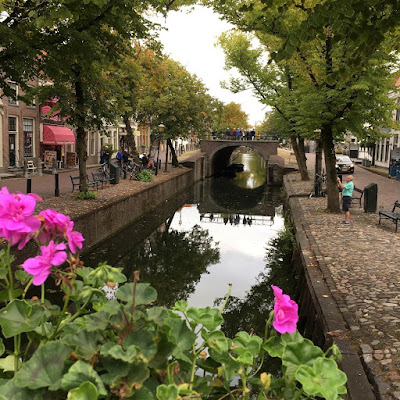 After a refreshment stop we returned via a different route and found ourselves back in the city with time to vist De Knijp (The Nip) a tiny little pub full of character, only open seven hours a week. 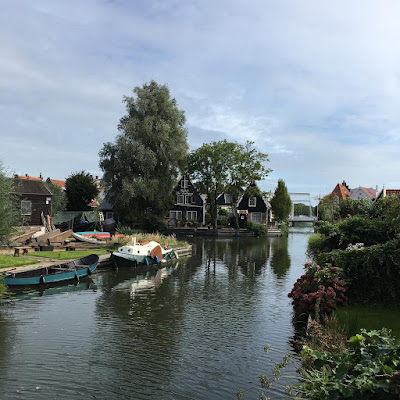 Whilst there we sampled the local liqueur... the Dutch way. The little tulip glasses are filled to the very top so full that the only way to move them is to slurp some off the top first... Proost! 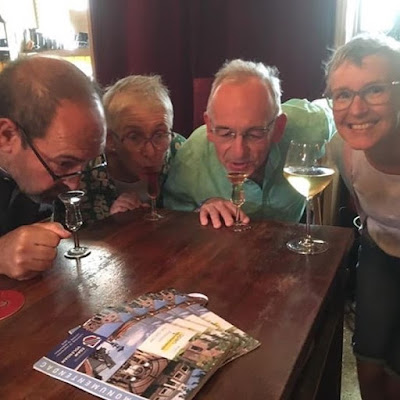 On our last day we had a very leisurely boat trip around the canals of Amsterdam and another little wander before catching our train back home. It's been a while since we had a break and it was just what we needed... nothing like some walking, eating, drinking and time spent with good friends to recharge the batteries!
Posted by Gina at 10:26 7 comments: 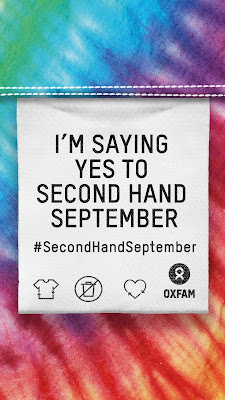 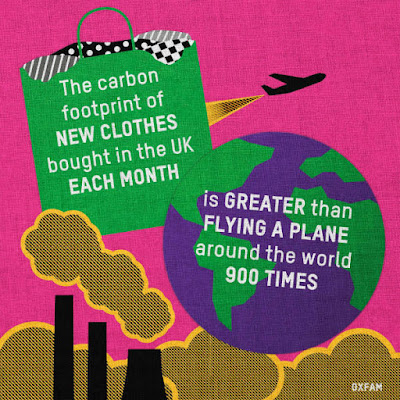 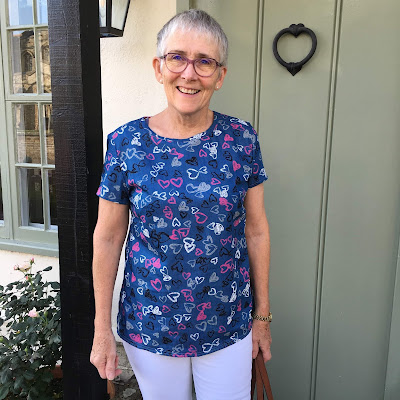 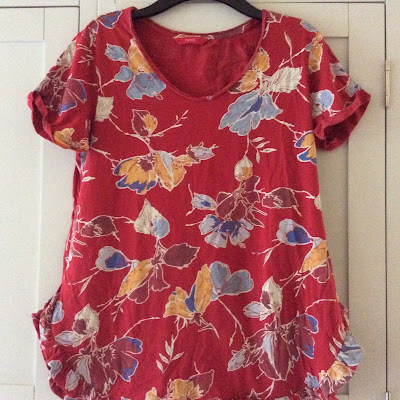 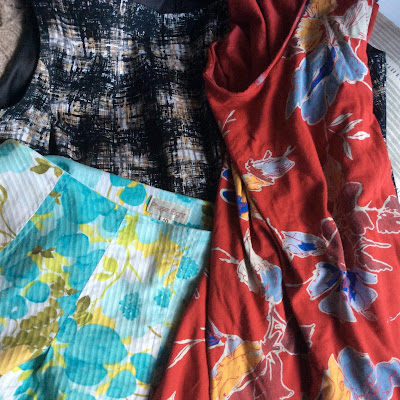