Driving home from work a couple of weeks ago I was listening to a radio programme called "All in the Mind" and they were discussing bucket lists... you know... those things you want to do before you kick the bucket, like swimming with dolphins, sky diving, that sort of thing. They had an expert giving her opinion and she seemed to think that they were not a good thing, taking away spontaneity and keeping us focused on a rigid path in life. She claimed that it became harder to live in the moment if we go through our life ticking things off a list. She also seemed to think by creating a bucket list we were fooling ourselves into thinking we could control our own deaths but I was already shouting no, no, no at the radio by this point! When I embarked upon my 60 x 60 project I guess you could have called it a bucket list but it was never like that for me. It was about trying sixty new things I had never done before, visiting some of those places I had never got around to visiting, one or two were long time ambitions but mostly it was a case of instead of saying "I'll do that one day..." , I actually did it! Most of the things I did weren't actually on a list as such but the result of spontaneous decisions. For example we had driven past The Angel of the North dozens of times and every time we said we should stop there one day. As soon as I decided to embark on 60 x 60, the next time we headed north we actually stopped instead of just thinking about it.

I got to sixty new things but not until my 62nd year, but that didn't matter because it was never a race and I had plenty of fun on the way. Like I said, some were a long time ambition, like starting a baking business. As it happens I decided it wasn't really for me but I would never have known that if I hadn't tried. Many of the things I ended up doing were quite ordinary, several involved food, and one or two things were very exciting like the indoor sky diving and tree top zip wires. As well as recording everything here on my blog I also made a scrapbook and it's fun to flick through and remember everything. It certainly never felt like following a rigid path but just like having lots of fun.

So although when I got to the end of sixty things it was a bit tongue in cheek when I said I was going to start a 100 x 100 project I have been slowly notching up some new experiences. There are things I would still like to do such as see the northern lights one day... and yes, I quite fancy swimming with dolphins, but mostly it will be about trying new things. And making myself a new scrapbook to look back on when I get to be 100... maybe! 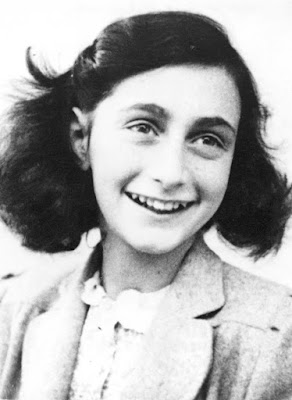 The first thing in my 100 x 100 was visiting The Ann Frank house in Amsterdam which we did back in September, something I had wanted to do for quite some time. 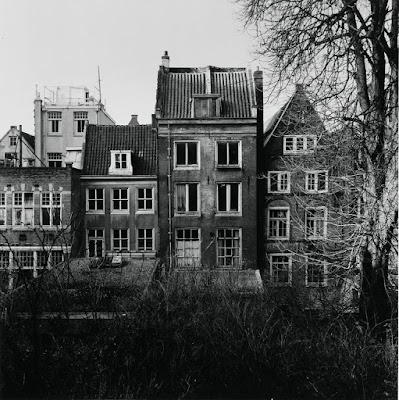 I can't say it ever occurred to me that I wanted to go on a 'feral retreat' and learn to spin in the wild but when the opportunity arose  it sounded like fun so I decided why not! 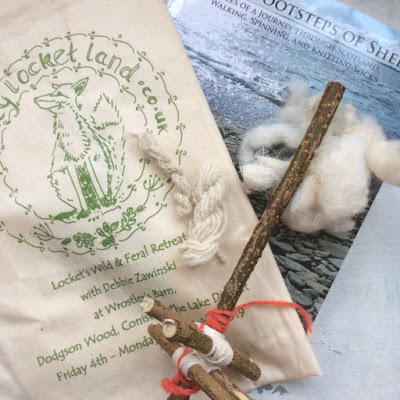 I might also have embarked in some wild swimming if I'd had a decent size towel with me but decided that air drying in The Lake District October probably wasn't sensible! 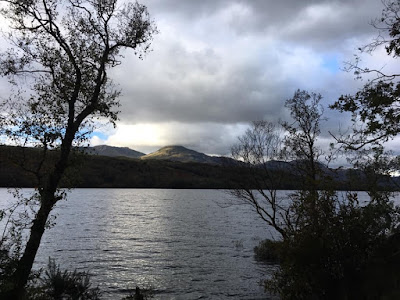 I've often said I would like to learn to carve a spoon and so when I saw a course advertised locally I took the chance and signed up. 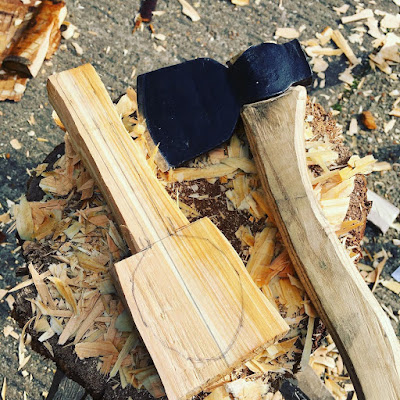 I really did enjoy it and whilst I would like to do more, realistically I know I don't have the time for another hobby. Something else would have to give. At Christmas I got to wind the  village church clock for a week. 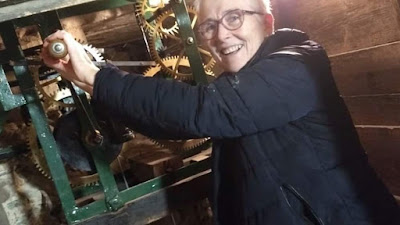 I don't think it would have been something I would have added to my list if there was an actual list, but it was certainly interesting, wonderful to be part of village history and of course a brand new experience. 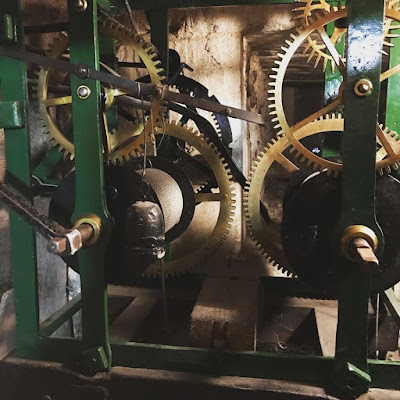 The next thing I would like to do is complete a Park Run. That might not seem like much of an ambition for someone who has run two marathons but I thought I would never run again, so getting back to a fitness level where I can run 5k will feel like quite an achievement. And I've never actually done a Park Run so it will be a first.

And all this is a rather long winded post to say I had another new experience on Saturday. We went to the local pub for a Burn's Supper and one of the choices for dessert was a deep fried Mars Bar. It has always sounded so wrong and actually not something I've ever really fancied but it was there on the menu so egged on my my Scottish born husband (who also had never had one before) we both opted for the Mars Bar rather than the more sensible Scottish shortbread.  It wasn't the prettiest dessert, looking more like a battered sausage than anything else, but I have to admit it was surprisingly good. Not something I would eat every week, and possibly never again if I care about my arteries but it's another experience clocked up! 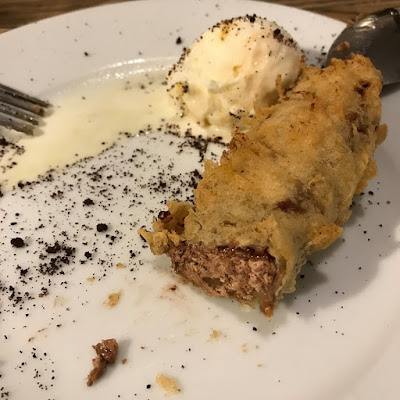 I'm not a big fan of resolutions but somehow a new year seems to be a good time for fresh starts and good intentions. For years I used to be a runner... quite a keen runner, belonging to running clubs, competing in races and even running a couple of marathons. But about ten years ago, on the advice of my GP, I gave it all up as I began to feel the wear and tear on my knees. I've always done plenty of walking and some swimming and my knees haven't really felt any better or worse. But I have really missed running and recently I've had a hunch that a bit of gentle jogging wouldn't hurt... and if it did I could always stop. So I decided that I would like to gently build up to doing a Park Run in 2020 and so three weeks ago I embarked on the Couch to 5k programme. So far so good and there have been no ill effects other than finding it hard work!

One of the hardest things is resisting buying new kit. I still have a pair of decent running shoes but I have been looking longingly at some of the latest lycra running gear. However, as you may remember, back in September I took a pledge not to buy any new clothes for a year in an effort to consume less... so it's been no new kit for me. In fact I have been wearing long sleeved Ron Hill running tops that are about thirty years old... but they do the job and I'm kidding myself if I think a bit of new running gear is going to make me look good when I run! Wobbly, bright red and panting has never really been a good look, has it?

My year of not buying new is going well and so far all I have bought is a pair of socks. They were necessary and I think can be classed as underwear which I am allowing myself to buy new. I draw the line at second hand knickers etc. I do have a look around the charity shops now and then though and last week came home with some great bargains. I bought a pair of shoes, previously unworn, a Phase Eight dress and an M & S top all for a total price of £12.50! I'm a charity shop convert. 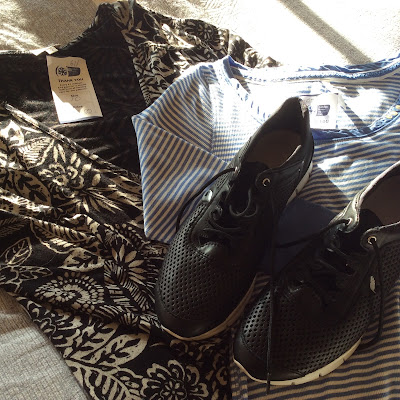 The other intention I have set for the new year is to try and work on my art every day. It is such a pleasure to be working in my lovely new studio that this has been an easy one. I haven't always managed every single day as sometimes work and other things can get in the way but it has certainly become a regular habit and I have made lots of new pictures already this year, using a combination of painting, collage and stitch. 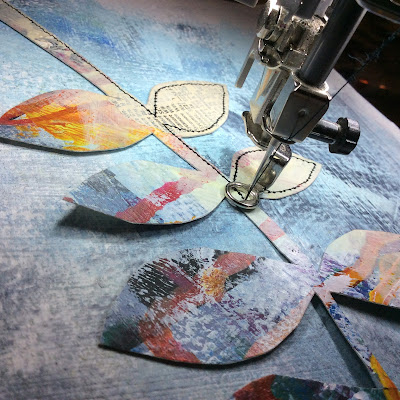 And I've been having fun with an app called InSituArtRoom that takes your photographs and makes them look like framed pictures in different room settings! 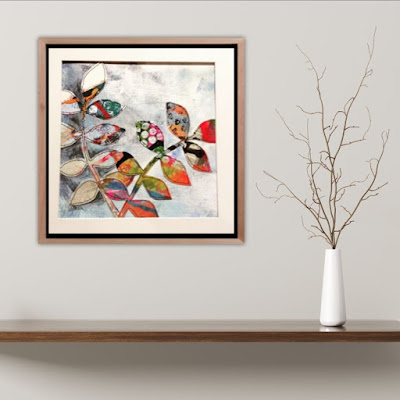 Although soon some of my pictures are going to be adorning some real walls and will be displayed in our local pub. 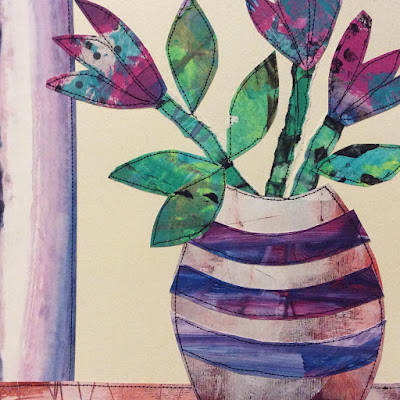 Have you had any good intentions for this new year?

A Room of my Own

When we moved at the beginning of July it was always the intention to have a studio built for me in the garden. Initially there was much deliberation as to where it would go... in front of the garage? Down the left side of the garden? Right side? We changed our minds daily but we both knew the only real solution was to demolish the existing garage, which was only being used to store clutter, definitely not cars. I can't remember when we last put a car in the garage.

So an action plan was drawn up and the first job was empty the garage. Despite our extensive decluttering before we downsized there were still many more trips to the dump and the remaining contents were stored under a tarpaulin on the lawn whilst we bought a shed. Cue another round of indecision as to the location of the shed but eventually the shed was built and the stuff that had been sitting on the lawn was transferred... totally filling it. We are promising ourselves another declutter once the weather warms up and we can face empying the shed.

The garage was demolished, unfortunately an old plum tree had to be felled too, but it will be replaced in the autumn and studio was build on the site of the garage. 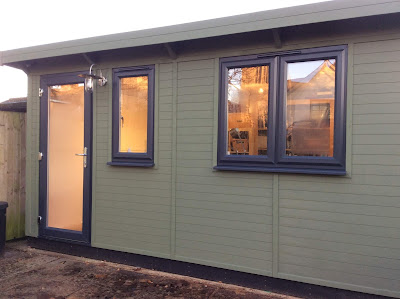 By the end of November, five months after moving my studio was up and finished. 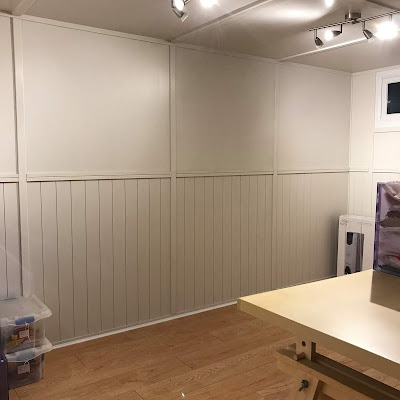 Of course it was then a slow process moving all the stuff that belonged in the studio out from the house. It's hard to believe I had gone through it all prior to moving and got rid of so much because I still have way too much stuff... just in case I might need it you know! 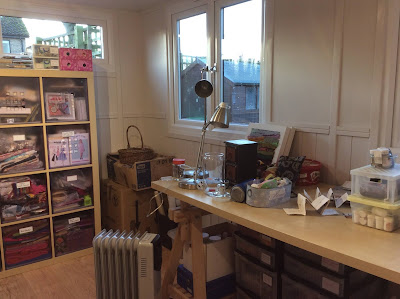 It has taken a while, especially with Christmas etc but it is slowly taking shape and it is so good to release some space in the house. 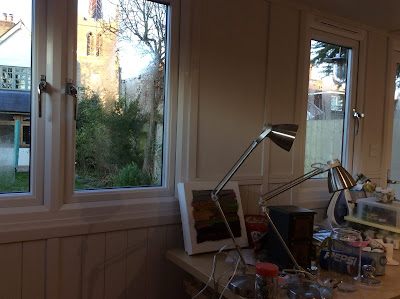 Boxes are being emptied and homes are gradually being found for things, although there are still some things I spend forever searching for! 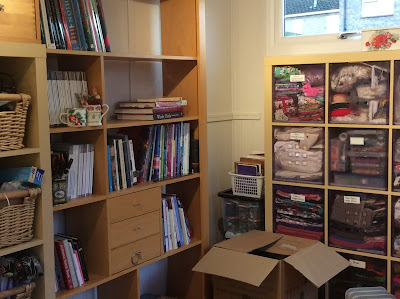 But the best thing of all is I love being out there. It takes a little while to heat up so I switch the heater on about an hour before I need to go out, but then it stays reasonably warm and cosy. And I get quite lost in my own little world... mostly painting I have to say. There's not been a lot of sewing going on! 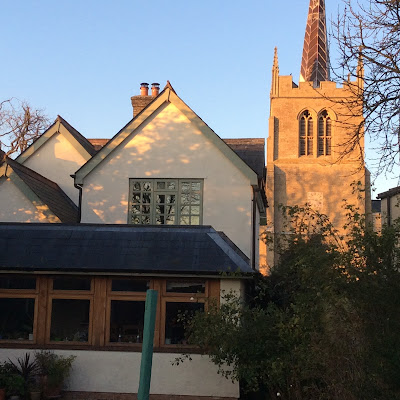 And just look at the lovely view of the church from my window. It's not a bad place to be going to work and the commute is pretty good too! I just need to train the staff to bring me out regular cups of tea.
Posted by Gina at 20:33 13 comments: