I am very excited to be part of a new blogging group... well new to me anyway... or rather to be more specific, I am new to the group, which is actually long established! Shall I stop wittering on and tell you about it? Okay, this is going to be a long post, but there is a recipe at the end if you make it that far!

The Cake Slice Bakers are a group of cake loving bakers who each year chose a cake themed book to bake from. Up until October 2016 they will be baking from Maida Heatter’s Cakes. Each month the participating bakers are given 4 recipes to choose from, which vary in type and flavour. Then on the 20th of each month each baker reveals what they have chosen on their respective blogs. 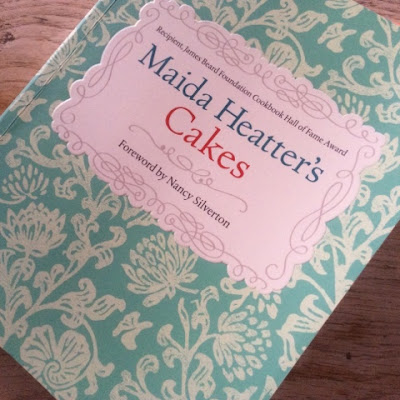 The first thing I had to do was buy the book... what hardship to add another cake book to my collection! When it arrived I wasn't too sure if I was going to like it. It is an American book - nothing wrong with that per say- but it does mean all the measurements are in cups and imperial, which is not how I tend to bake. Being a teacher of mathematics in a former life my brain just works in metric. But I do have a set of baking cups so decided I would use the cup measures but convert it all to metric as I went along. Second problem... no photos, so no idea of what the finished results should look like. But hey, I'm a baker so that shouldn't be a problem, right!

As I read through the introduction though, I decided that I was probably going to like this book very much. The instructions are very clearly written and  precise and left me feeling there was still plenty to learn. The choices this month included a cheesecake which I will try one day when there are more of us here to share it, a rather fancy four layer frosted banana cake which I felt required a celebration as an excuse to make it, an upside down cranberry cake which I really wanted to make except now that Christmas is over there were no fresh cranberries to be found anywhere... which left a lemon cake. Now I already have an excellent and reliable lemon drizzle cake recipe but when a cake is called "The Best Damn Lemon Cake" that just sounds like a challenge to me. Also I thought it would be good to start with a plain cake for my first month with The Cake Slice Bakers. 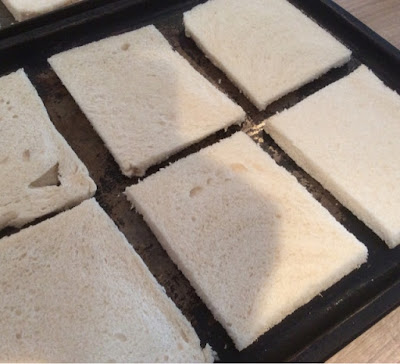 The first thing that really stood out in this book is that rather than butter and flour her tins, or use a cake liner like me, Maida Heatter butters the pans and then dusts them with fine breadcrumbs. So my first task was to dry out several slices of crustless bread and then grind them up into crumbs. And while they were drying in a low oven I weighed out my ingredients. This is something I always do when I bake nowdays rather than the disorganised grabbing things from cupboards as I went along that I used to do, which invariably resulted in missing out a crucial ingredient. 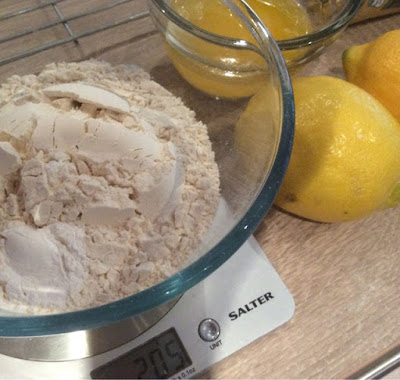 Lots of lovely breadcrumbs ready to use... ground to a fine crumb but not a powder! While I think of it... a word about flour too. Maida Heatter suggests sifting the flour before measuring into cups for a recipe. As flour tends to settle in its packaging 1 cup of unsifted flour is likely to be several spoonfuls more than 1 cup of sifted flour so this is good advice. I measured out a cup from my flour canister, I sifted it and then remeasured before weighing... so if you follow my recipe, it doesn't matter if you sift before or after weighing. 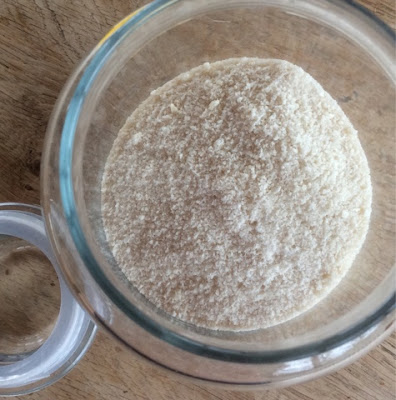 From there, I pretty much followed the instructions to the letter.. just one or two adjustments. The first ingredient in the recipe list is blanched almonds which then need to be ground. As I had ready ground almonds in the cupboard I used the equivilent weight of these instead. And further down it requires a whole  1 ounce bottle of lemon extract... a whole bottle! I just couldn't bring myself to put in a whole bottle where I would usually use just a single teaspoon. I felt it would give a bitter flavour, so I used half a bottle or 2 tablespoons which was still a lot more than I felt comfortable using. I also reduced the salt slightly bacause I don't like the flavour of salt in cakes. 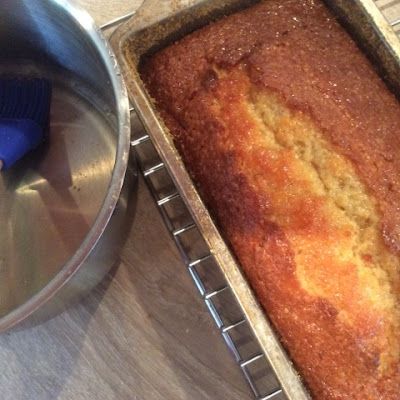 When the cake was done it was slowly brushed with lemon glaze and then... this was the hard part... when cool, it was wrapped in clingfilm and allowed to stand for 24 hours before eating. I had a hard time explaining that one to my family of cake testers! 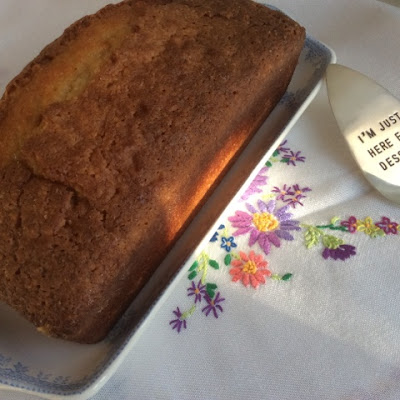 It looked good, smelled good, had a lovely crust (the breadcrumbs really did work) and a lovely light, even crumb... and the important part... the taste? 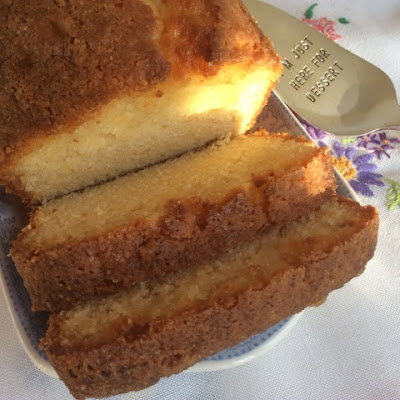 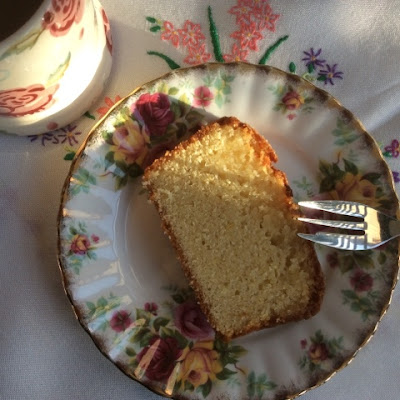 It was very tangy with a sharp hit of  lemon where the glaze had soaked through... 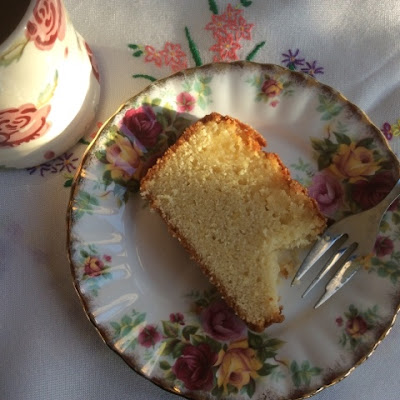 And it had a lovely texture and flavour. It wasn't at all bitter from the large quantity of lemon extract so maybe I should have been brave and used a whole bottle. (In truth I think I was just too mean!) 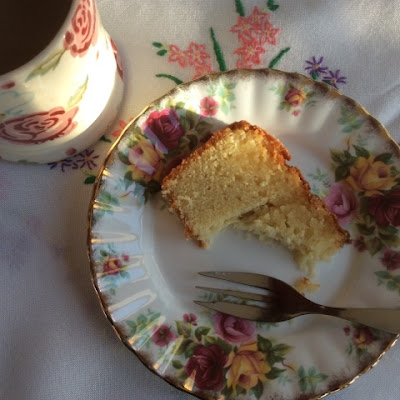 But would I agree it is the best damn lemon cake... probably not. It was very good but in my opinion it wasn't any better than the one I always make. I'm not sure what keeping it for 24 hours contributed to the resulting taste or texture either so I can't really comment on that. 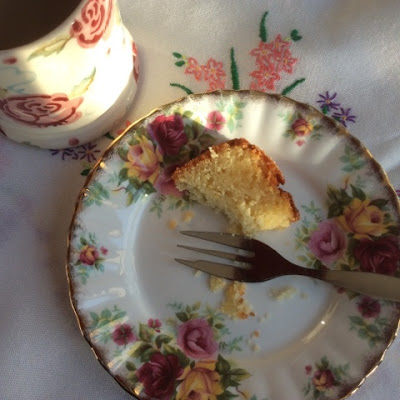 But that said, it didn't last very long after the 24 hours! My version of the recipe follows at the end of this post, should you wish to try it for yourself. And meanwhile I'm already planning what I can make next month! And if you click on the link at the end of the post you can see what the other cake slice bakers have been making! 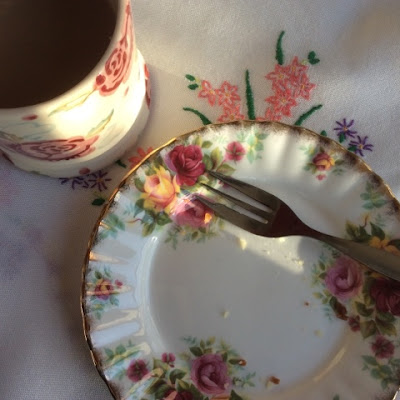 While the cake is baking prepare the glaze. Gently melt 100g granulated sugar with 75ml lemon juice (from the lemons used in the cake). Do not let the mixture boil. Remove the cake from the oven and allow to stand for 2-3 minutes. Then very slowly brush the hot glaze over the cake (this should take about 5 minutes). When the cake is almost cool, turn it out of the tin and allow to cool completely on a wire rack. When cold, wrap the cake in clingfilm or foil and allow to stand 12-24 hours before serving.