One of the best things about village life is the wonderful range of entertainment and activities that are on offer. There is everything from sport, live theatre and music to quizzes, films and social suppers. Last weekend saw the very first Literary Festival to be held in my now ex but neighbouring village which gave me the ideal excuse to escape the unpacking of boxes.

There was a fabulous programme of speakers and interviews, each with a local connection plus we were treated to a generous ploughman's lunch with wine. 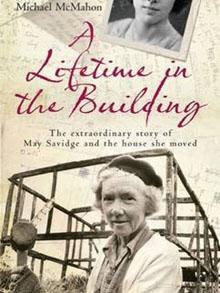 The first speaker was Christine Adams who told the extraordinary story of her ex-husband's aunt, May Savidge, who following a demolition order, single handedly moved her medieval home, literally beam by beam, brick by brick and nail by nail, 100 miles from Ware in Hertfordshire , to rebuild it in Wells next to Sea in Norfolk. She worked on it for twenty three years but never completed the task. However she left the house to the family and Christine took on the task of finishing it. Christine's story is just as remarkable as May's and she is a natural story teller. I had been fortunate enough to meet Christine a few years ago and found her story so engaging I immediately bought her book "A Lifetime in the Building" (now renamed Miss Savidge Moves Her House) which I can thoroughly recommend. 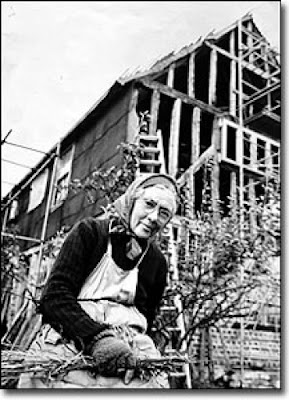 After our excellent lunch we were treated to a recital of poetry by award winning poet Tom Weir who grew up in the village. (I remember him when he was a small boy.) In all honesty I don't really understand most poetry, it goes right over my head and especially I find it impossible to read. But listening to Tom explain the reasons for writing some of his verses, with his wry observation and gentle humour and then hearing his recitals from two of his collections, I feel I could be converted. It was powerful and at times emotional but made us laugh too. 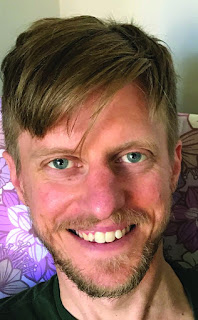 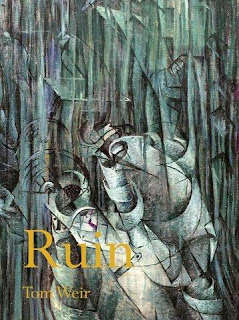 Next followed a lively conversation between Sarah Harrison, Jenny Chapman and Jim Prothero. The festival was the brain child of Sarah Harrison, a successful local author. Jenny is an author and journalist and Jim has recently self published his first novel although he also has a children's book and several screenplays under his belt. He describes himself as an author in a bricklayer's body! They spoke about the trials and tribulations of getting published as well as the importance of setting aside regular and achievable chunks of time to write. 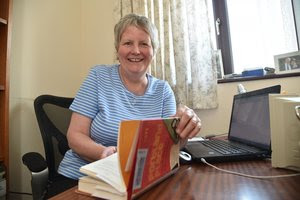 The day concluded with Sarah interviewing Sarah Shaw about her book. The Secret Diary of a 1970s Secretary. I have known Sarah a long time, as our sons were friends back in primary school and we were in the local Am Dram group together. When Sarah was packing up her house to move to Dorset she discovered a diary in her loft dating back to 1971 when she had started work for the BBC. She typed upthe diary and self published it as an ebook and although I had downloaded it to my Kindle I couldn't bring myself to read it immediately. What if I didn't like it... what would I say to Sarah? But after a lunch date Sarah asked me what I thought and  I decided that I really did need to bite the bullet and read it. I started that afternoon and two days later I'd finished it. I loved this book and by the time I got to the second half I couldn't put it down. Not only does it tell the story of 19 year old Sarah's time working as secretary for the BBC and living in a run down hostel in London, it also conveys the era perfectly giving a wonderful picture of the food we ate, the clothes we wore and the music we listened to at the time. But the book's success is largely down to the story woven against this backdrop, that of  the blossoming but unlikely romance between Sarah and the lift operator at the BBC's old Langham building. It is written with great humour and honesty, with a brilliant eye for detail that took me right back to 1971. And it is not only now available in hardback and paperback but there is due to be a dramatised TV programme too. 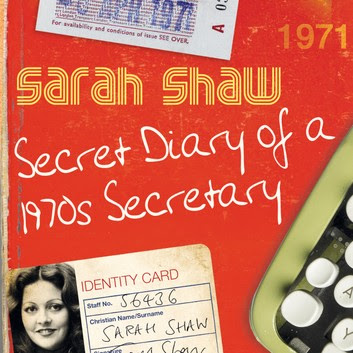 It really was a brilliant day and I love that it was called the first Steeple Morden Literary Festival with promise of more to come in future. Of course that remains to be seen as village events such as these rely so much on the hard work and good will of many volunteers and without support they cannot go ahead. And if there is a single negative comment to be made it was the lack of local support for this amazing Litfest. I didn't count the numbers in the audience but sadly it felt sparse, with several of those attending coming from afar. I'm not sure why more local people didn't turn up and give their support, maybe they thought it wasn't for them but all I can say is they missed a treat because it was a wonderful programme of speakers and conversations that was entertaining, uplifting and inspiring.

At the end, a friend asked if I ever think I would like to write, which I dismissed with a the comment that I don't think I have any stories in me. But when she suggested that my Instagram feed makes interesting reading it occurred to me that I have actually been writing for twelve years in this blog! Mostly stories with pictures, sometimes diary, sometimes general observations about life with a large dose of cake thrown in for good measure, but writing nonetheless. And that prompted me to write this post!
Posted by Gina at 14:37