It is hard to believe after all the waiting but we have been in our new home for nearly four weeks. I could probably write about the move itself but we've all been there... and it's stressful. Trying to remember everything feels overwhelming, what to leave behind, what to pack in the last minute box, not to mention the several hours cleaning everything as we emptied each room. That was a complete waste of time as the new occupants of our old house haven't moved in but instead are gutting the place. Bathrooms, fitted wardrobes, carpets... you name it, it's all coming out. Wish they had told me... the place hadn't been that clean in years! Despite only being a mile and a quarter away from the last house, and us both having friends in this village, not to mention all the activities we already do in here, it does feel completely different... and we love it! 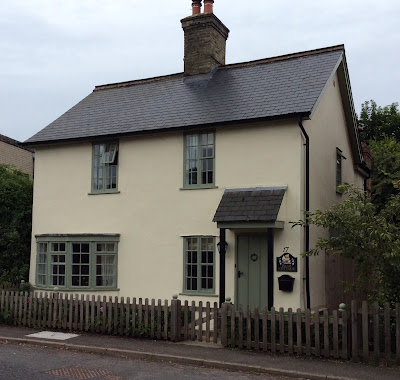 The view from our front door looks right across the road to the beautiful church and we love hearing the bells as well as the hourly clock chiming. It kept us awake the first night and we did wonder if it had been a mistake to move into a house right opposite a church, but we really haven't heard it since and I have already managed to get myself on the clock winding rota. 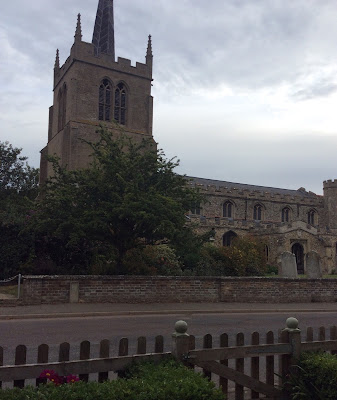 We're lucky that the house itself doesn't need anything doing to it. It's clean, well maintained and the decor is very neutral so we can take our time putting our own stamp on the place. However that doesn't mean that we are all unpacked and sorted... far from it! We thought we had done a really good job of clearing and getting rid of stuff, after all we were doing it for long enough. But we still have far too much stuff so the decluttering continues. And I no longer have a studio, so everything that was in my previously spacious studio is now in boxes scattered all over the house, which makes gathering things for teaching an interesting experience to say the least. The plan is to replace the rather tired looking garage at the end of the garden with a purpose built studio and shed, but all in good time. The garden also needs a complete overhaul but I have decided that waiting a year to see what comes up etc will be the sensible approach. Which of course is just a ploy to put it off for a year! At least it is looking a little greener today after all the rain than it does in the photo below. 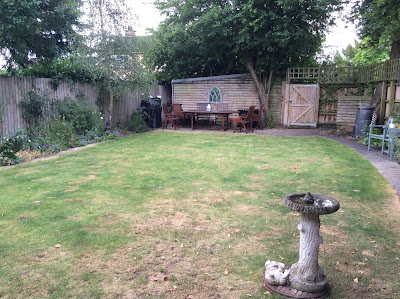 One of the major changes I have had to adapt to is cooking on an Aga. I have never been one of these people who have longed for an Aga or the lifestyle it implies. I couldn't really see the appeal. I also happened to love my electric/gas range cooker and knew that would be the one thing that I would really miss in my old kitchen. But I admit, the Aga is a thing of beauty and I have started to get the hang of it. 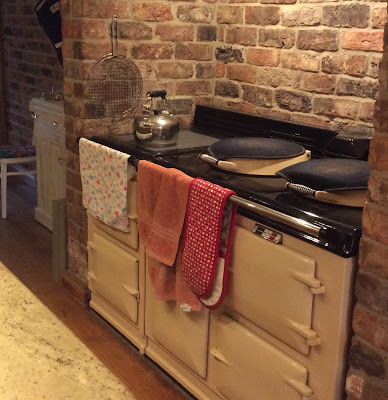 Meals tend to be oven roasted combinations that all go into one pan and get cooked together. 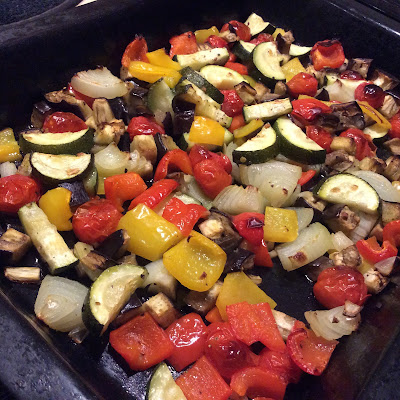 Virtually anything goes and so far everything has been a resounding success (although I have yet to be brave enough to bake a cake). But... and it really is a big but... I just hate the fact that the thing is hot for twenty four hours a day, seven days a week, using electricity and pumping out heat when I might use the oven once a day if that, I boil the kettle a few times a day and sometimes make some toast. Maybe in the days of having four teenage sons at home when the oven always seemed to be on it would have been fantastic but with just two of us I am struggling to see how it can possibly be cost effective or in the least bit environmentally friendly. And so although it feels like heresy, I'm not sure the Aga will stay. The jury is out and there won't be a rushed decision, but I'm not convinced it's an asset. 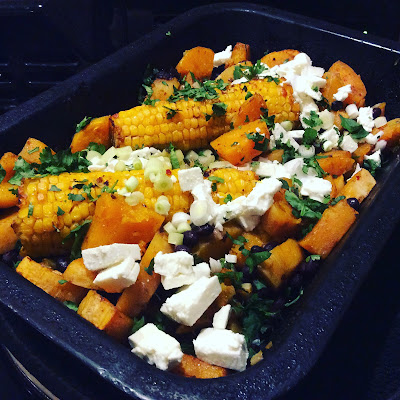 Despite my doubts about the Aga I rather like the rest of the kitchen. There is a central island that has the sink, dishwasher and a fridge fitted along with some cupboard space. There is a free standing larder and these fitted shelves. I managed to find a real bargain in a closing down sale and bought this sideboard that fits snuggly underneath  the shelves. Except the cupboard is painted off white and the shelves were a sludgy looking green. Actually I'm guilty of heresy again... they were painted in Farrow and Ball "Vert de Terre" which I'm sure is very classy but just happened to look a bit dark and dingy! There is no before photo but I have spent the past three days painting them off white to match the cupboard and I think it's a big improvement. I might be over sharing here but it was so hot in the kitchen during the heat wave this week given that the Aga was also throwing out heat, that I was stripped down to my underwear to do the painting. Fortunately there was no-one but the dog to see me because it was not a pretty sight and there really was paint everywhere! 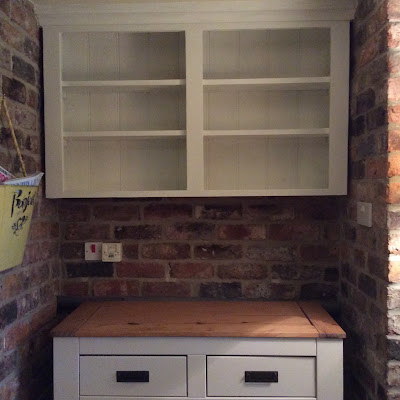 It has certainly brightened up this little corner. 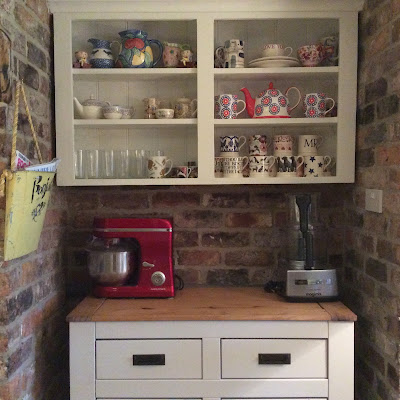 The squashed bucket thing on the wall was left with the house and I was all for getting rid of it. It caused a bit of a debate on Instagram and suggestions were made that it could be used as a planter (too many holes), it could hold dried flowers (no way... dusty things), it could hold utensils (potential in that one) or it could be a magazine holder, which is what I have opted for... for now. The thing still doesn't really 'spark joy' as they say! 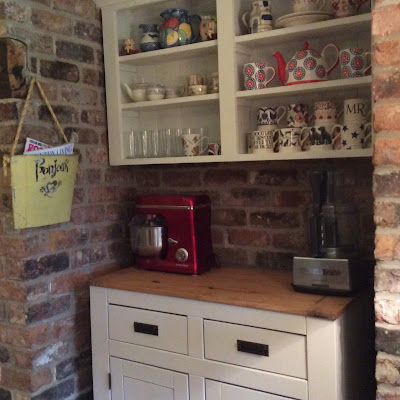 And so there we are... we have moved, we are happy, there are lots of changes we would like to make but we are also in no hurry. Just don't ask if we have unpacked yet!

In other news, I am off teaching at the Festival of Quilts next weekend (it has been a challenge finding all my resources to say the least) and with the move etc I complete forgot that I have some complimentary tickets to give away. If you are going to the FOQ and don't have a ticket please email me and let me know. If I post them on Monday you will still get them in time!