It has been one of those weeks when every time I thought I would write a blog post about this or that,  either the moment passed, I ran out of time or I forgot to take a photograph, and I ended up not blogging at all. So I thought I'd do a bit of a round up... a sort of "Five on Friday" but then I realised it wasn't Friday, so that wasn't going to work... so instead you've got "Random Crap Monday". Don't laugh... I could be onto something here... this is how trends start you know.
1. Open Studios 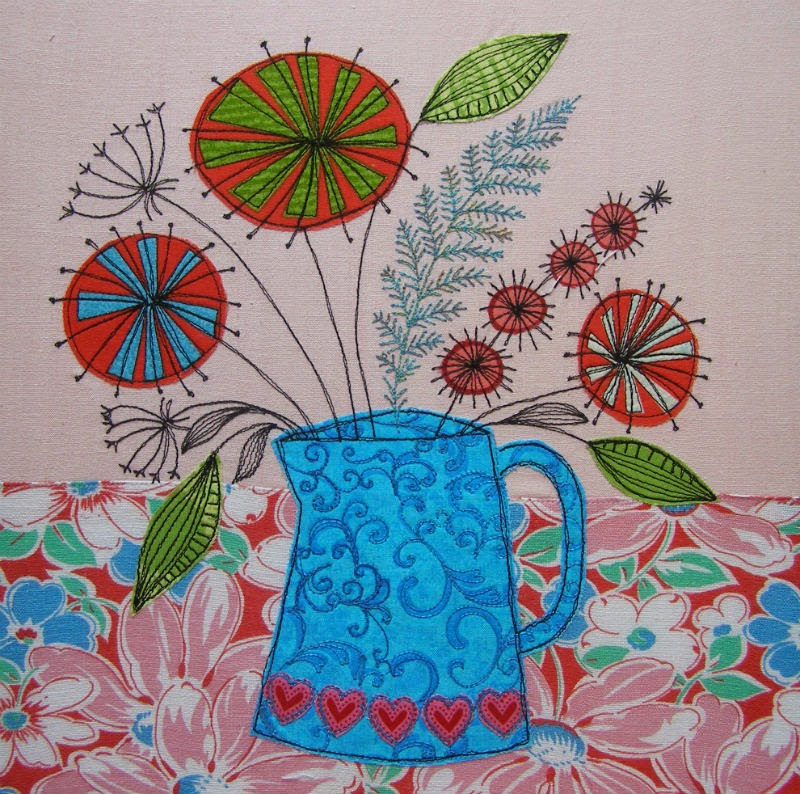 The reason for my "too busy to write a blog post busy-ness" is that I've got Open Studios coming up in just five days and every spare moment is being spent making stuff. I've been working on some new canvases, the same style as I made last year but in different colour schemes. They might be finished by Saturday... you never know!
2. Fabric Flowers 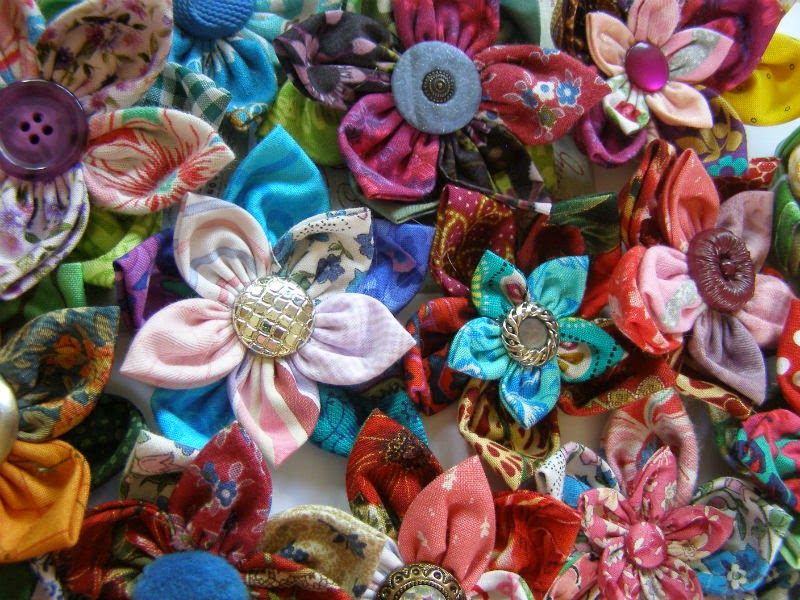 As well as new work for the walls I've been making loads more of the fabric flower corsages I made last week so that I'll have some smaller stuff to sell at my Open Studio weekends... and I'm also putting together a tutorial so you can make your own... but it's not finished yet!
3. Birthday Flowers 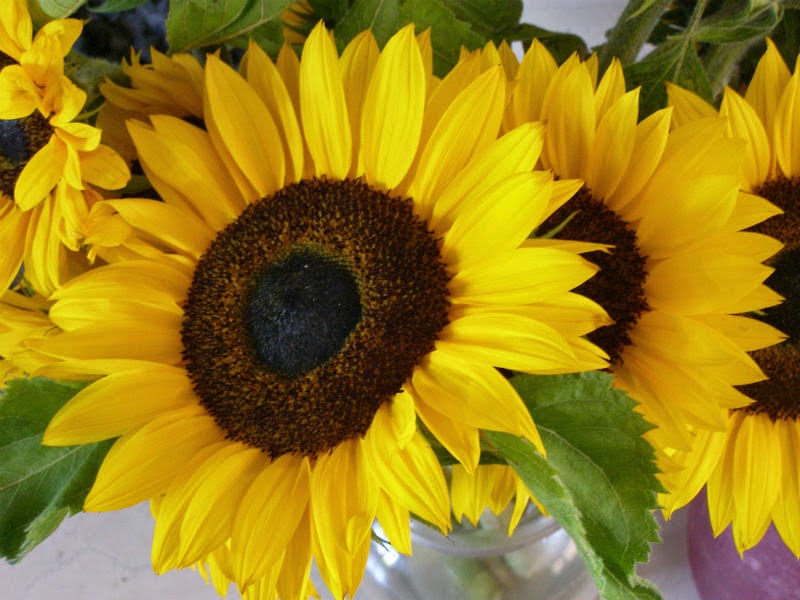 I had a birthday at the weekend. Nothing to make a fuss about... I've had loads of them before, but friends and family made sure I was thoroughly spoiled. I had loads of flowers, got taken out for lunch, had dinner made for me... and lots of really wonderful presents. I have lovely friends and a super family... thank you all! 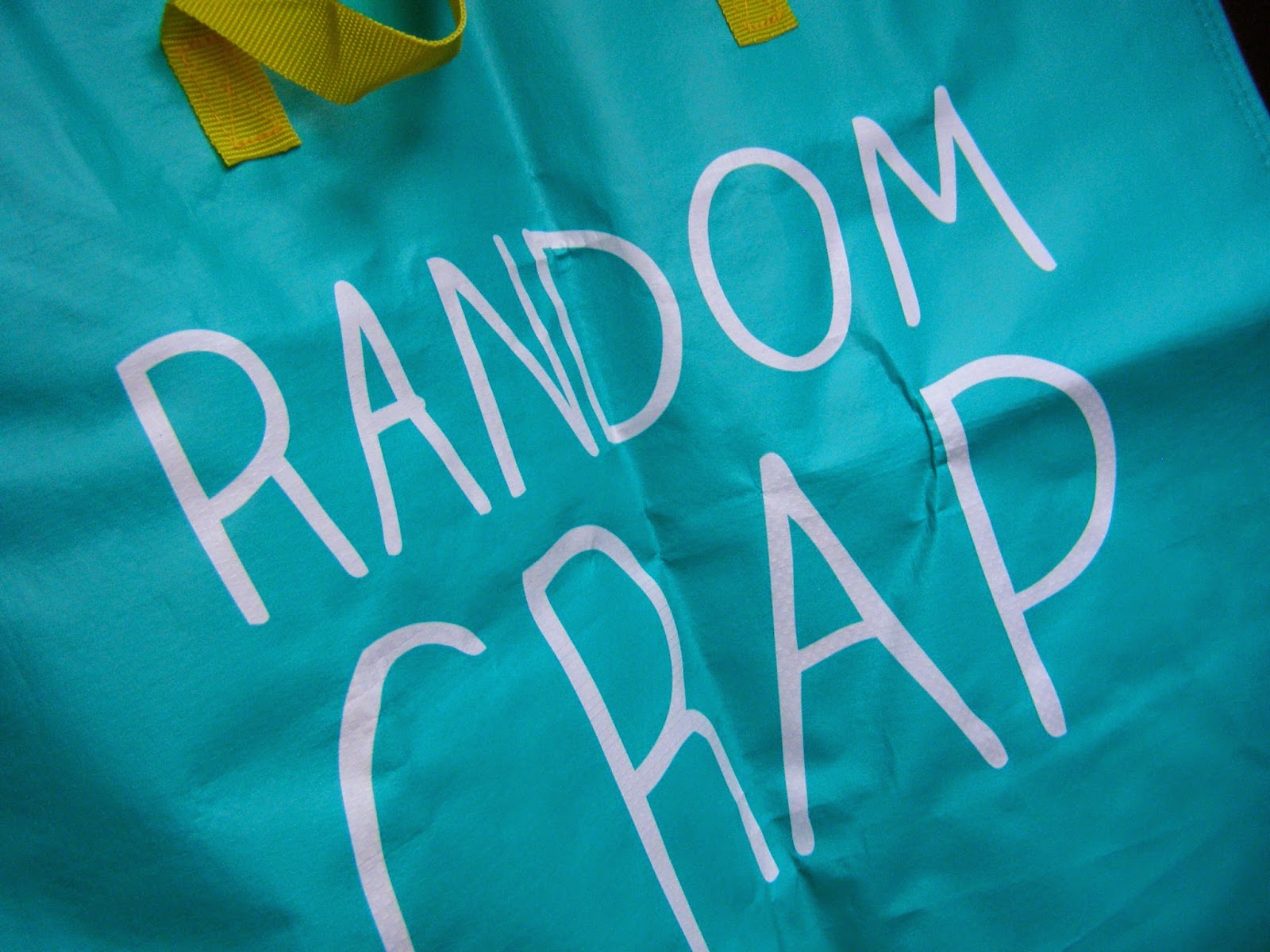 ... the present that made me laugh loudest though... this bag. (Which inspired this blog post) Next time I need to tidy my studio I can just shove everything in here. Thank you Jude!
4. A birthday cake 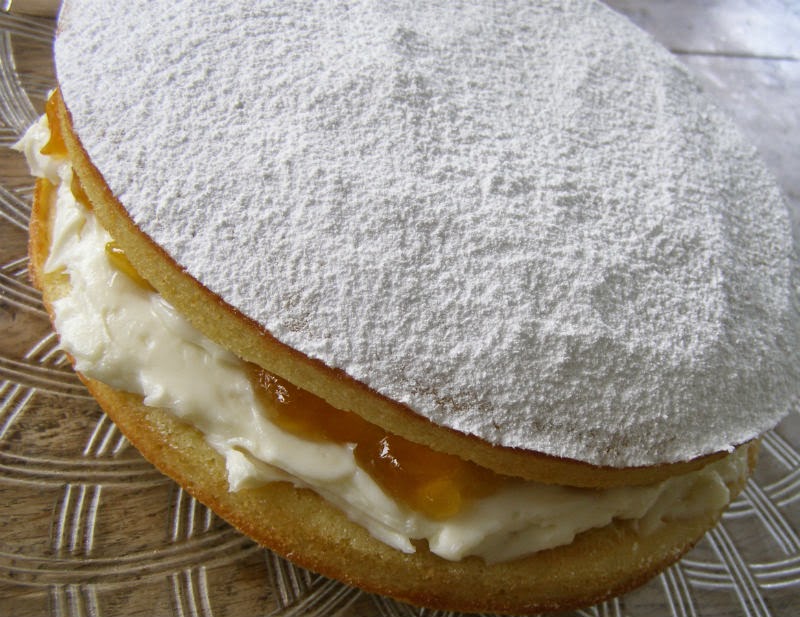 While I was out Saturday, Stewart made me a birthday cake. He has NEVER, ever made a cake before in his entire life, so this really was a big deal. He admitted it took, Google, Youtube and a trip to two different supermarkets... but give him his due he did it. And not only did he do it, it looked good and tasted wonderful too! Thank you Stewart for the cake and Gill for twisting his arm just a little bit!
5.  Le Tour de France 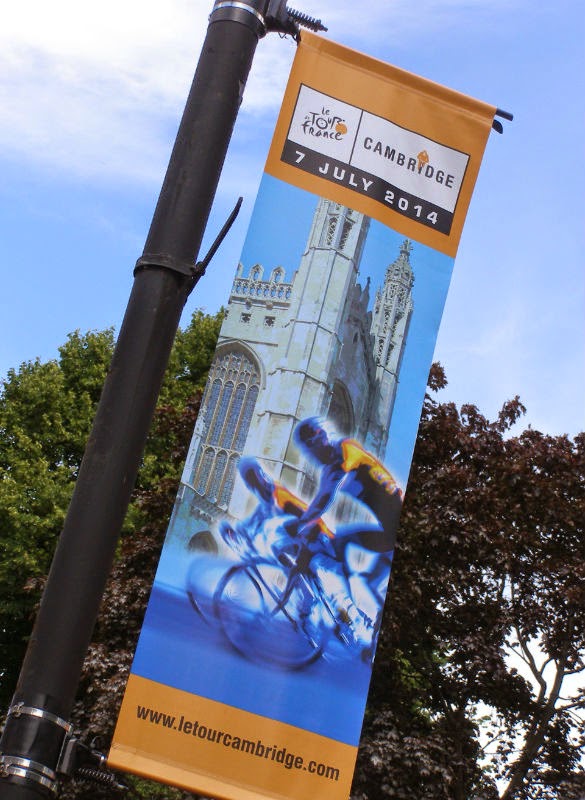 I decided to extend my birthday celebrations and took myself into Cambridge this morning to see the start of the third day of the Tour de France. 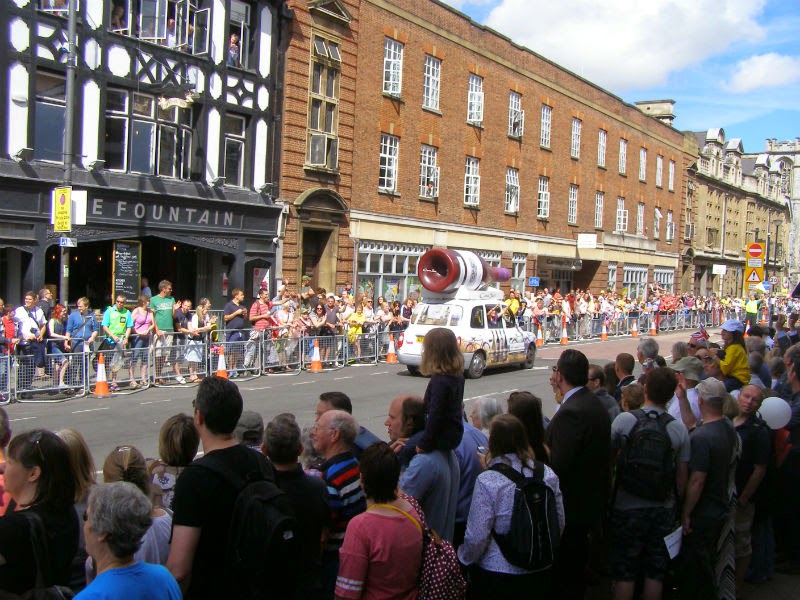 As to be expected the streets were packed but I found a good vantage point with some other friendly folk sat on top of a wall. 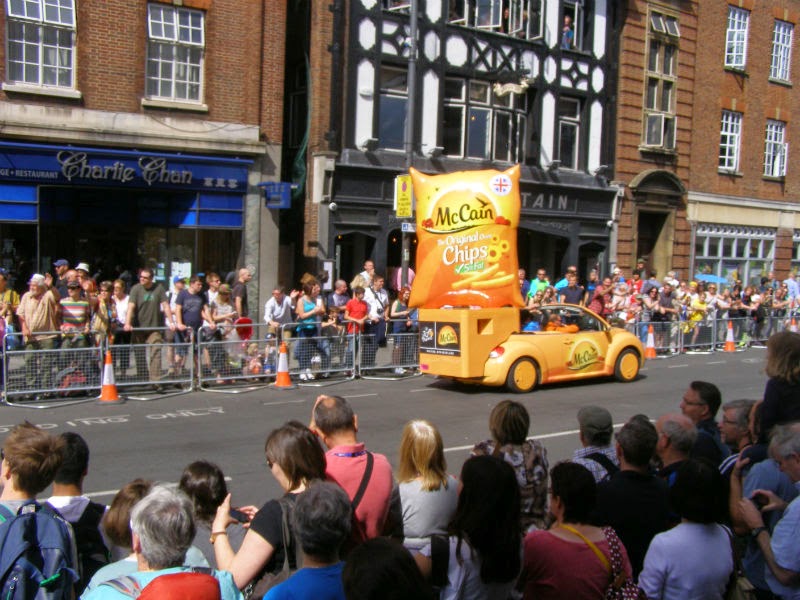 Before the start of the race, there were various vehicles from sponsors, French policemen on motorbikes, British police moterbikes etc. all whizzing past to cheers from the crowd. 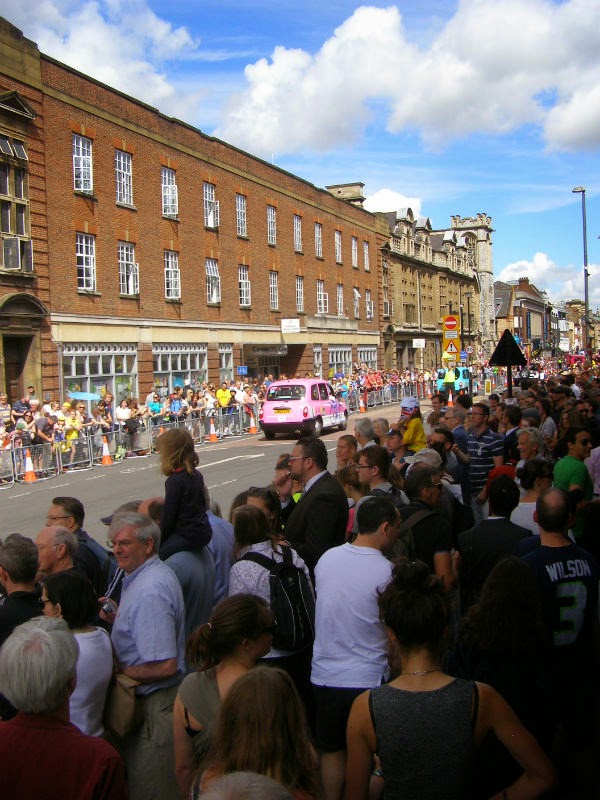 More and more people arrived, helicopters buzzed overhead and then suddenly after almost three hours of waiting, the cyclists came past... and it was really exciting for about ten seconds! 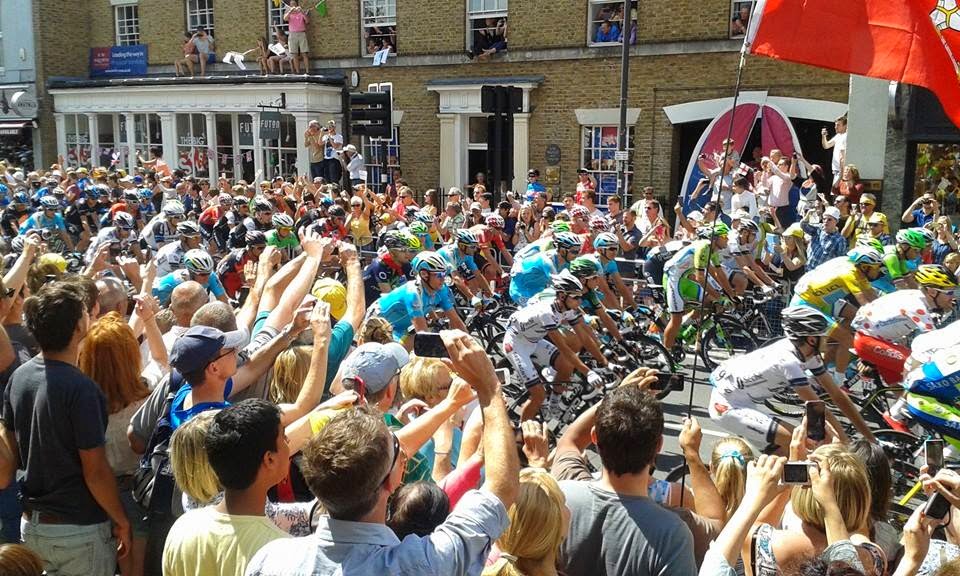 I jest, because it was a brilliant morning and the atmosphere was terrific and even though I'm pretty indifferent to cycling I had great day!
So there you are... that's my random crap for this week and tomorrow I'm back working on the Open Studios preparation. Do come and see me if you are around this way.
12th/13th July and 19th/20th July from 11 am. until 6 pm. Full details here:
www.camopenstudios.co.uk