Did You Miss Me?

You don't have to answer but this rather sad little blog has been somewhat neglected of late due to a combination of things really. The technology is making it more difficult than in the past so writing and posting photos seems to take longer, plus our lives have been totally taken up with the prospect of moving house. After twenty nine years I had forgotten what an upheaval it can be, although we have had a spanner thrown in the works last week... more on that later. Plus I sometimes think that after twelve years of writing this blog maybe it's time to call it a day. I think of things to write about and then when I actually find the time I'm not sure they are that interesting. Time to do something else possibly? Or maybe just take a break... oh hang on a minute... that's what I have just done! Anyway, for now, a little catch up of life chez moi. 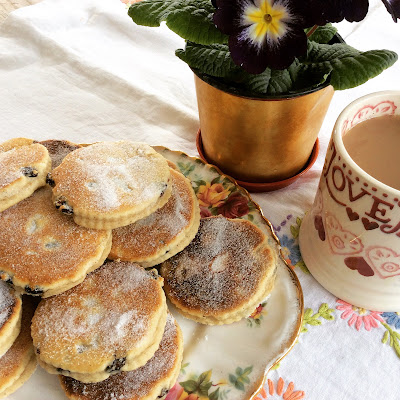 However busy there is always baking. I made Welsh cakes for my Mum on Mother's Day. There was an ulterior motive.... it was so I could eat them when I visited her. I may have had one hot from the griddle too, making the most of the fact that I still have a range cooker with a griddle. Mum used to make them for us when we were little and I'm guessing maybe her Mum, who was Welsh made them too. 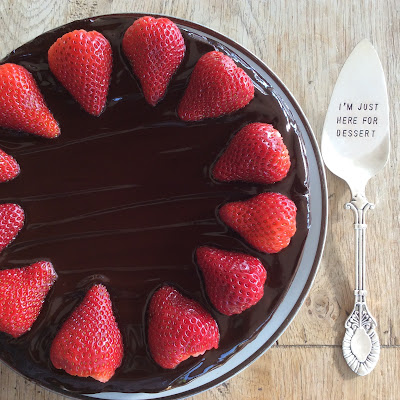 I made a chocolate cake for an Embroiderer's Guild supper party. We had Michala Gyetvai come to talk to us about her work. I have known Michala since the early days of blogging and although we have met once or twice I have never really seen her work up close. It was stunning and made me think I must get back to doing more sketching and producing more work... but maybe when we move and I have more time! 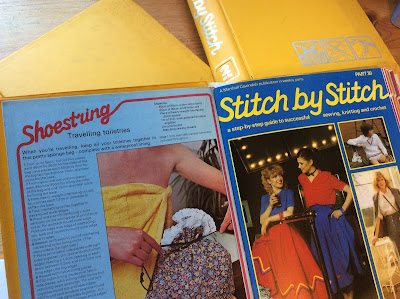 So... that move... Every day I try to clear another cupboard or box. Bags have been taken to the charity shop, items have been moved to their rightful owners (two car loads to son no. 2), some things inevitably have ended up in the skip and I have now also started selling things we no longer want. I have discovered the pleasure of ebay as people out bid each other and Facebook marketplace where our junk seems to be others' treasure. This entire set of 1980s magazines have found another home and although I was beaten down by £2 on the price - £8 instead of £10... does that really make them a bargain or is it just human nature to think we've got the upper hand - frankly I didn't care and I was happy because I would have given them away. They are definitely of their time. 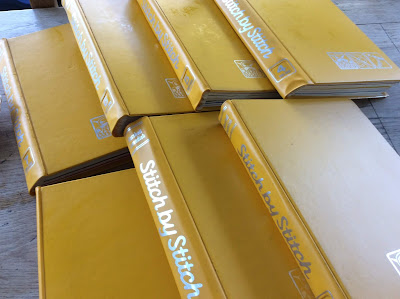 But all is not plain sailing with the move. A month ago I would have said we would be settling into our new cottage by now but that was before the results of our building survey. We had been aware of some subsidence in the past which we were told had been fixed, but it turns out the problem was more extensive than we were led to believe and possibly still ongoing. It wasn't just a case of the cost of putting it right but the problem of getting buildings insurance too. It felt too much of a risk to go ahead so we currently have nowhere to move to. But having found buyers who are ready to move we are keen not to lose them so we are now looking for somewhere to rent. It feels like a logistical nightmare but as all things no doubt we'll laugh about it one day. Or maybe not! 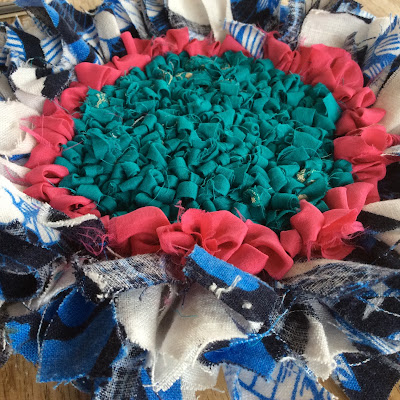 One of the logistical problems is deciding what goes into storage and what I need to keep back for work which carries on regardless and varies depending on what I'm teaching. Just in the past week or so there has been a rag rug workshop as well as finishing off some rugs for Elspeth at Ragged Life.

I have held a block printing workshop and have another lined up for a couple of weeks time. This was the result of printing on paper which was fun to do. I feel it needs to wrap around a special gift or possibly make a book cover. Which reminds me I am teaching book making in the autumn so better keep all those materials to hand too. 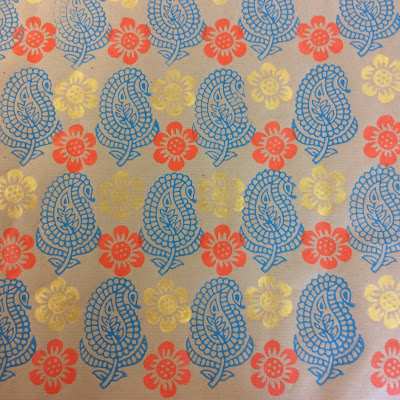 And most recently I have been sewing together coffee sacks to make the most mahoosive wall hanging... 2 m x 5 m to be precise. It was an exciting commission. The partner of the owner of the coffee shop where I occasionally work owns a business called Hot Numbers, which not only roasts and supplies coffee and provides barista training but also runs two coffee shops in Cambridge. Their latest venture is a big shiny new coffee shop and restaurant at the same site as their roastery and this wall hanging will be part of the decor. 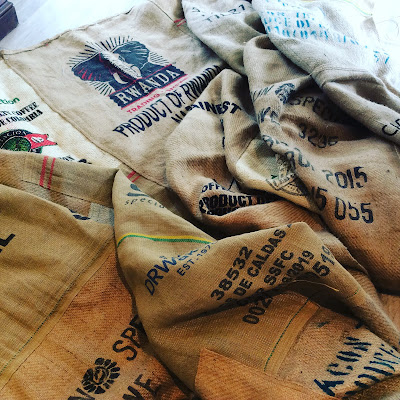 It was a real labour of love... my hands were stuck with pins more times than I care to remember,  I broke several machine needles, my house was covered in hessian fibres and dust and I didn't stop sneezing for days. Not only that but I had no idea what the finished thing looked like or if it would even work as there was nowhere big enough to spread it out at home. But it is up in situ and is okay so I've now got to make the second one... preferably before we move! 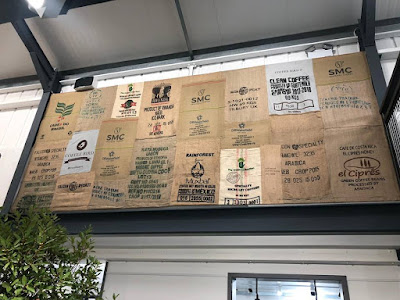 I keep sane by walking. Every morning whatever the weather the dog still needs to go out and it sets me up for the day, helping to keep a perspective on things. Sometimes I'm even rewarded by a beautiful sight like this. Although not this morning as I'm currently sitting with my feet up and an ice pack on my right shin. I've had a niggling pain for a few days but after a day working in the cafe on my feet all day yesterday I'm now in agony with full blown shin splints! 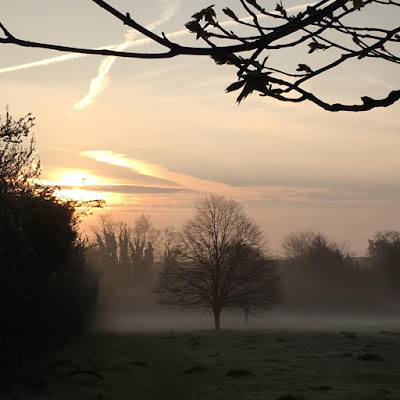 So that's my life for the past few weeks. I don't think I'm quite ready to give up blogging yet but my appearances here might be sporadic. I'm hoping you won't give up on me. I'm finding commenting on blogs and replying to comments sporadic too... sometimes it works and other times not but I'm still reading what you say if you leave a comment and I'm still reading your blogs too although I miss that connection when the comments don't seem to work.