For years I was a runner. It was such a huge part of my life that I would define myself as a runner. Several times a week, wherever I happened to be I would go out for a run. I loved that feeling of escape, of being outdoors just me and the elements. And I was addicted to the buzz that came after a run. Plus there was that wonderful bonus of being able to eat whatever I liked and stay thin... I like food almost as much as I liked running! I was never particularly good or fast but enjoyed taking part in races. Mostly they were local and fairly short, 10k but I also have a few half marathons under my belt... and two London Marathons too. This is me wet and bedraggled, with my arm in plaster (broken whilst roller skating six weeks before!) crossing the finish line... seventeen years ago!

But unfortunately osteoarthritis in both knees put paid to my running days. I hated not being able to run and although I walked the dog every day it never provided the same buzz or feeling of achievement. And then when the dog died three years ago even walking stopped being a regular part of my life despite a couple of organised walks. But I have recently rediscovered the joy of regular walking. 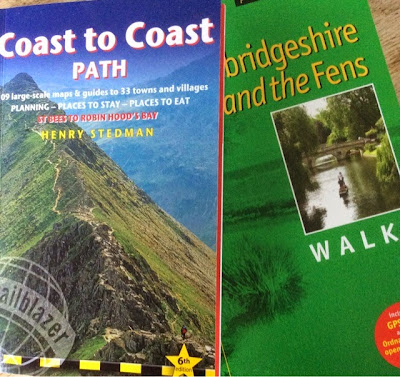 By gradually increasing the distances I walk my knees seem to be okay... most of the time... and my long time ambition of completing the Coast to Coast walk actually seems to be something I might actually achieve rather than just being a dream. I've bought a couple of books of local walks and I plan to work my way through as many of them as possible. I like the idea of "being in training" and having something to aim for and realise that is what I've missed about my running days. I thrive on targets, goals and challenges. But I've also discovered that unlike running, when I'm out for a walk I have time to observe what is around me and it has made me want to learn more about local flora and fauna... something I know very little about. I can see this becoming a new obsession! 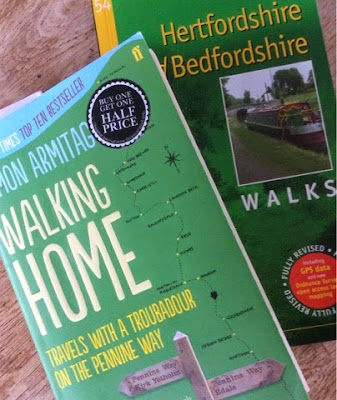 And when I'm not actually walking I have been reading about other people's long distance walks and I have just started Walking Home by Simon Armitage which is very entertaining. All of which, along with gardening and teaching this week, explains why I've not had much time for blogging! And I'm not the only one... Annie has been turning her thoughts to reading about walks too!
I had to laugh... whilst typing up this post, Joe, who usually plays football on a Saturday but doesn't have a game today decided he would go for a run instead. I've just opened the door to him on his return to be met with the words... "That was horrible". Just as well we don't all enjoy the same things I suppose!﻿
Posted by Gina at 12:19