Knitting... not as you know it!

It has been quite a while since I posted anything degree related on here. My last module was a written module about Embroidery in its Social Context so not much to show. My latest module which is Personal Specialism so far has proved really frustrating and I haven't felt like sharing it, but at last I'm feeling fired up and enthusiasic so thought I would do an update.

Personal Specialism is about exploring our own creative style, researching ideas in depth and beginning to build a body of work. It's about pushing boundaries and looking at things with fresh eyes. Assignments are set to guide us through and the first one was about taking a technique and exploring it with different materials. I chose knitting and for reasons not entire clear to me I started with metres and metres of french knitting... 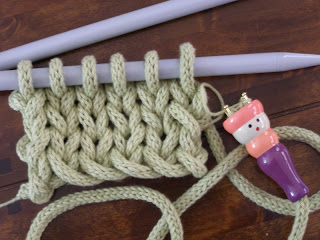 Which I then knitted! You won't believe how much this took to knit this small piece. It was useful for producing drawings of the structure of knitting but didn't inspire any further investigation. 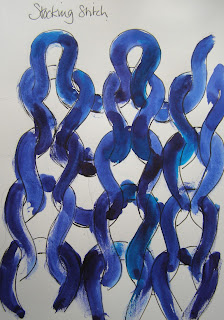 Thinking about how I could change the structure of the knitted piece I had the bright idea of knitting with modroc (plaster impregnated bandage). Bright idea??? Dust and mess everywhere... but the finished results were surprisingly soft and almost lace like. 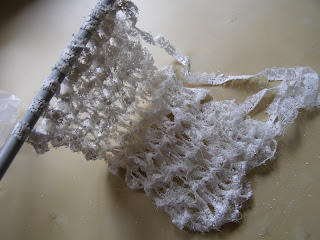 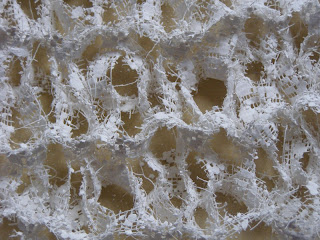 Then I dipped the whole lot in water and left it to dry... hey presto... solid knitting! 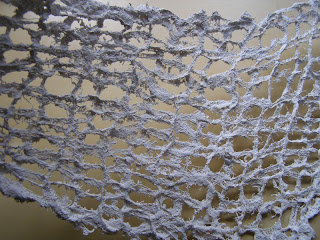 One of the other things we have to do is take lots of photographs of the work in different environments and I was intrigued by the shadows produced by the various bits of work. The modroc knitting, being rigid, produced beautiful shadows. 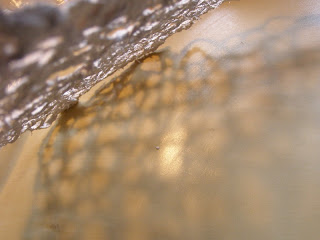 This seemed to have potential to take further but I didn't know how so changed track again and started knitting with string. This I sprayed with blue dye, giving lovely stencilled images on the paper behind and then I stuck it in water and took more photographs. I was quite excited by these images and liked the idea of permanently trapping knitting in water or something that looked like water. Resin maybe??? 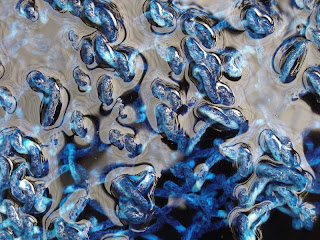 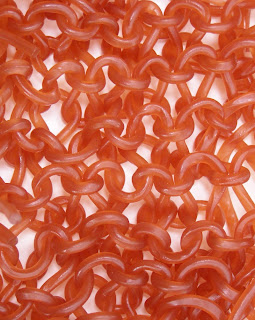 Which I then set into strawberry jelly! Not quite the same effect and as the jelly set the laces absorbed the liquid and became quite revolting and distorted. When Joe did his customary look in the fridge for something interesting (as boys frquently do) he was disgusted... "Why is there a bowl of innards in the fridge?" 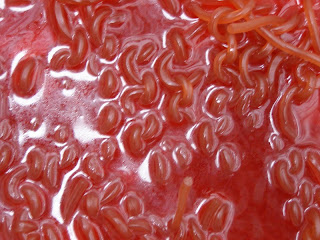 At this point I was feeling quite despondant. Lots of ideas, lots of experiments, some of them fun, some of them interesting but nothing that I felt I wanted to develop into a personal specialism. After a long chat with my tutor this week she suggested I should forget the knitting for a while and it was as if that was the key...

I want back to the idea of trapping knitting into liquid and thought about trapping something that looks like liquid into knitting. Instead of abandoning knitting altogether I knitted another piece in pure wool, trapped glass nuggets by tying them into the surface which I then felted. The result is little shimmering pieces of glass showing through the felt which links right back to previous themes I've explored... protection, concealment and revealing. 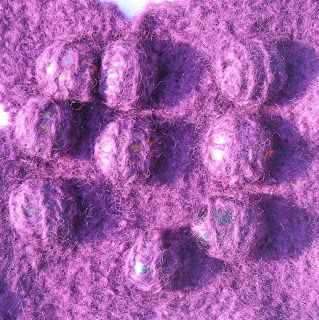 Meanwhile the resin arrived... a very small amount for the money and I realised I would have to scale down. I tryed knitting a piece with sewing needles and cotton but it was painful! Instead I crocheted some very tiny flowers. 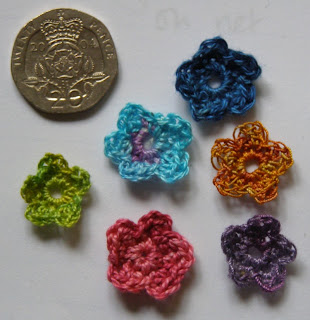 Which I have set into small resin beads. I love them! 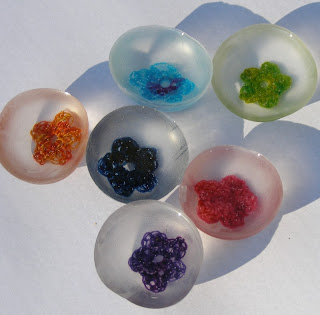 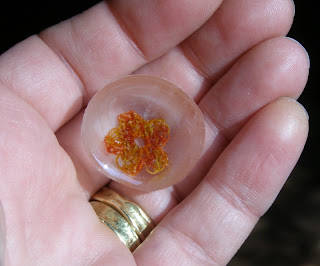 I'm off now to trap these within some more felted knitting... Knitting (or crochet) trapped in liquid (resin) which is trapped in more knitting... how weird is that! Suddenly I have lots more ideas for felting and trapping and all sorts of things and at last I feel I have the beginnings of a personal specialism... could be gone a while!
Posted by Gina at 09:53